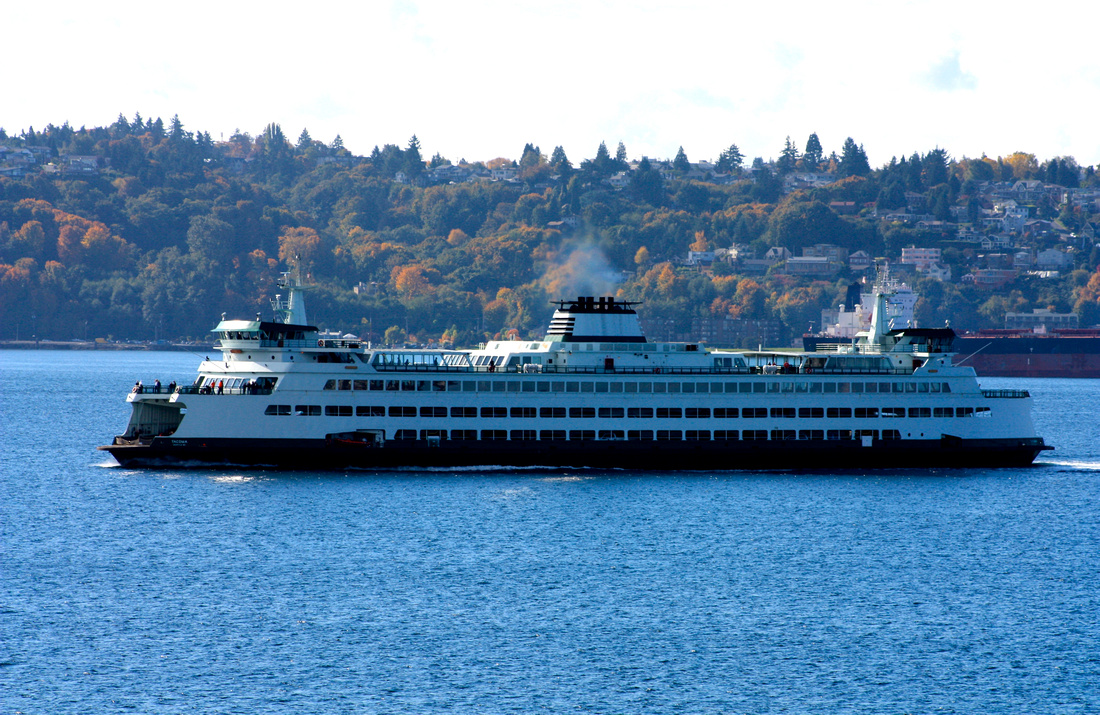 The job isn’t all James Bond lifestyle and exotic international destinations.  I often find myself in US cities that you would expect a fortune 500 to do business in.  (In my other job I fly business aircraft for a large international company.)  We frequent Washington DC, New York, Detroit, and even Seattle.  A few years ago I was excited to discover that we were going to be spending a few days in Seattle, Washington. I attended high school nearby in Tacoma, so I was looking forward to returning to the Pacific Northwest.

When you fly a business jet to Seattle, you often use Boeing Field instead of the larger Seattle - Tacoma SEATAC airport.  Boeing field is home to - wait for it - The Boeing Company where they manufacture all the "7" series of aircraft.  (737, 747, 767, 787, etc..)  It's always interesting to land at Boeing Field and see all the brand new jets with fresh paint jobs parked on their line ready to fly to their new homes.  We arrived from Asia on this trip, headed to the hotel and waited for sleep to arrive so I would be fresh to explore downtown with my new DSLR camera.

Well, it didn’t arrive.  When you constantly fly international destinations, jet lag is a never ending battle.  Managing sleep is one is a major part of the job.  I can usually adapt fairly quickly, but for some reason on the trip no matter how many sheep I counted I couldn’t seem to fall asleep.

After tossing and turning all night, I finally gave up around 5:30 am - grabbed some breakfast and headed out with my camera. 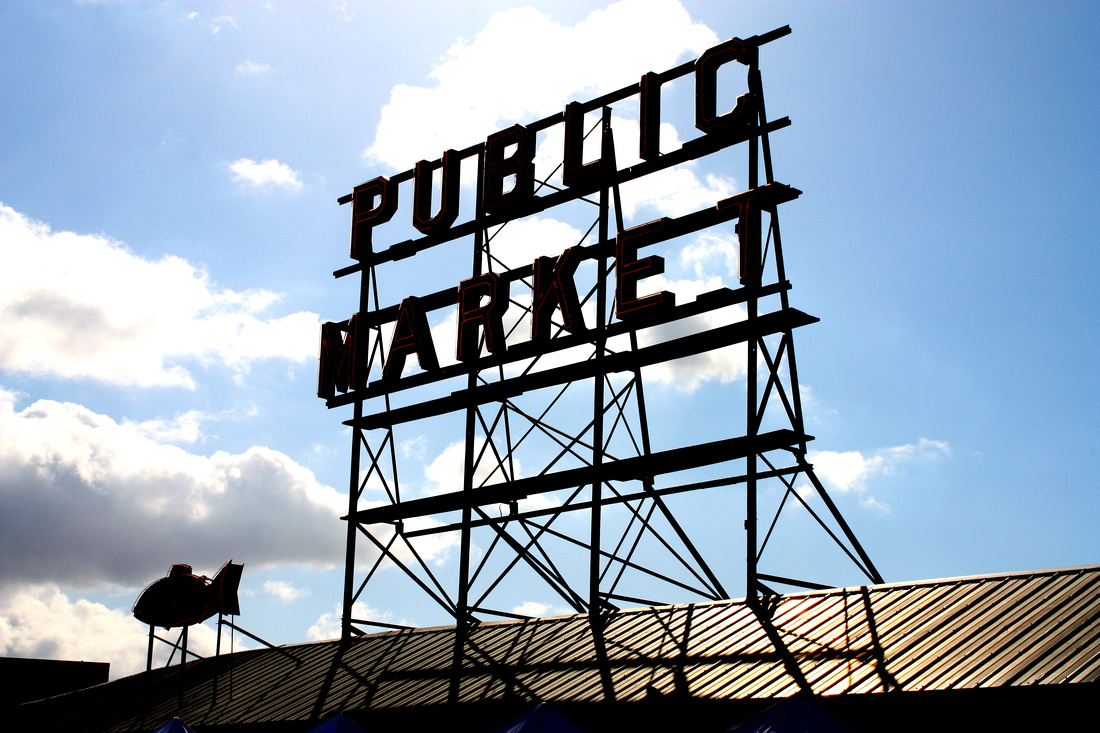 I was excited to check out Pike Place Market, the famous fish market in Seattle.  I picked up the cheesy hotel map of the city and headed out in what I thought was the direction of the market.  While I didn’t end up taking the most direct route, I finally ended up finding it after a much needed caffeine fill-up at one of the quad-zillion coffee shops Seattle has to offer. 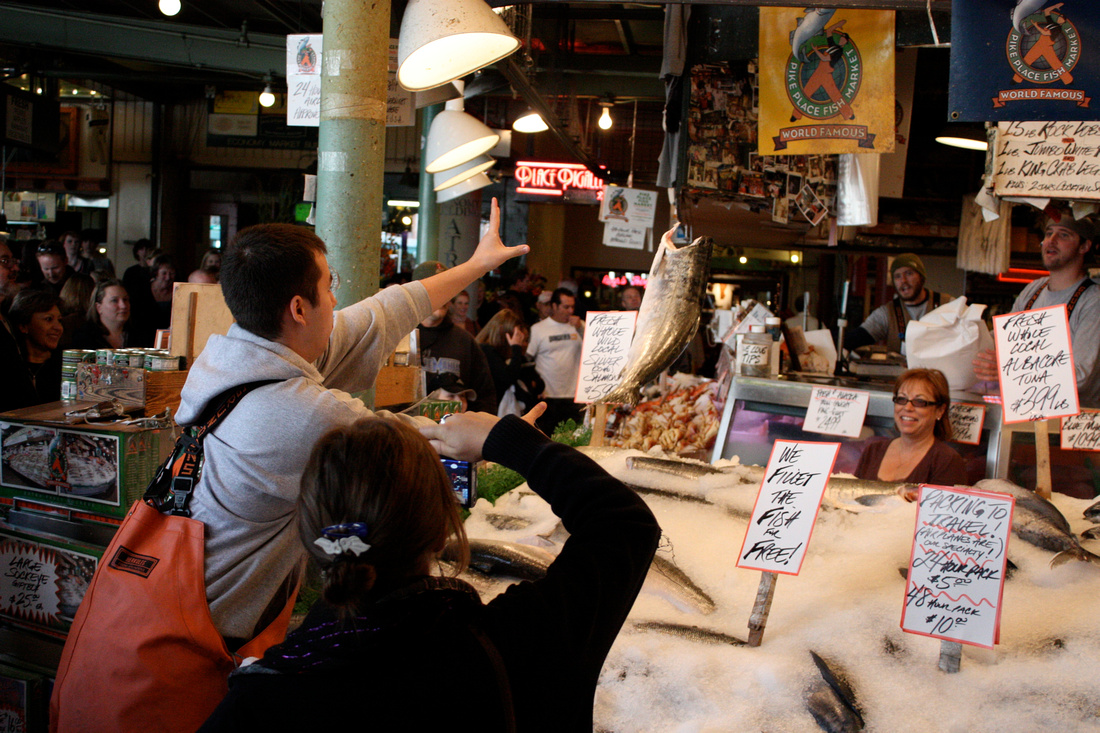 The "Fish Toss" is a bit they do at the fish market.  After a customer picks out what they want, a guy behind a counter pulls out a fish and then THROWS it to one of his co-workers who expertly catches it and wraps the fish up to take home.  It's great fun to watch and always draws a crowd.

After throwing (and catching hopefully) several fish, the true comedy happens.  They have a large fake stuffed fish that looks VERY real and the fish tosser acts like he botches a fish throw and sends the stuffed-animal flying into a shrieking crowd.  Good times.  This act never ceases to be funny.  (At least to the market workers.) 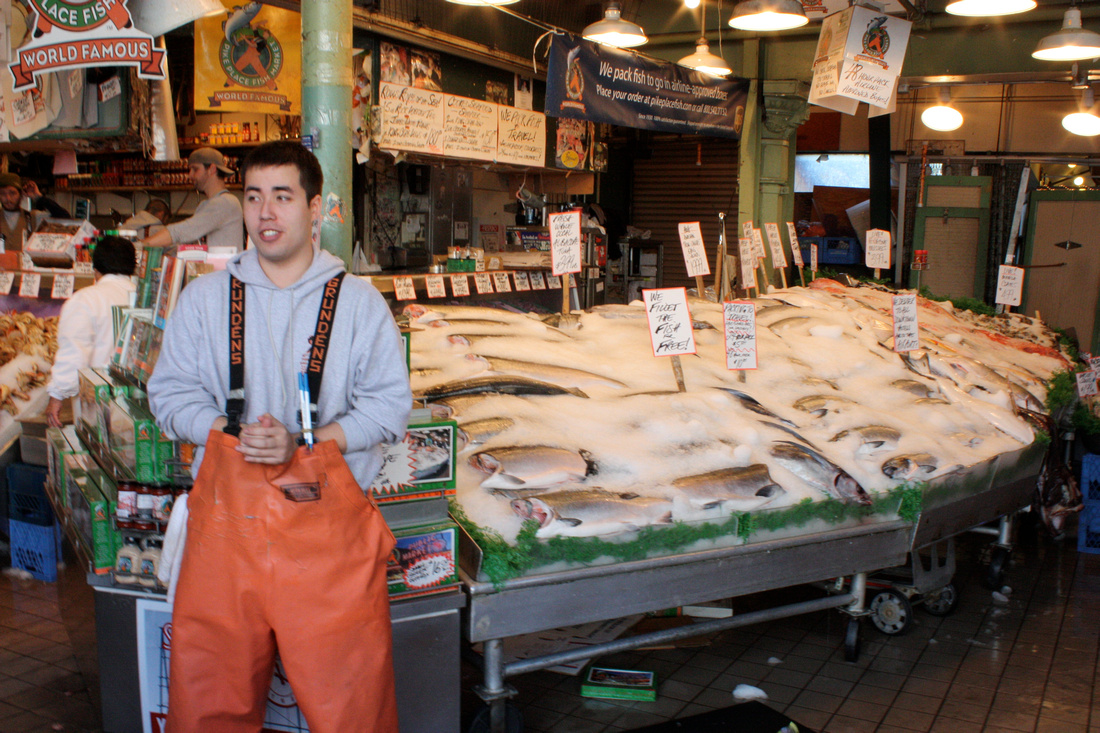 Here is one of the fish-gag culprits gloating about making another tourist pull a hammie trying to avoid getting hit by a 20 pound salmon.

The Seattle trip happened just after I had purchased my first DSLR, and I was still learning how to use it - I hadn’t fully figured out how to work in low light conditions, as you can see from the “soft” image above.  I believe as photographers we are always learning (or should be) - it’s good to have early images you can contrast against later ones to see how you’ve improved. 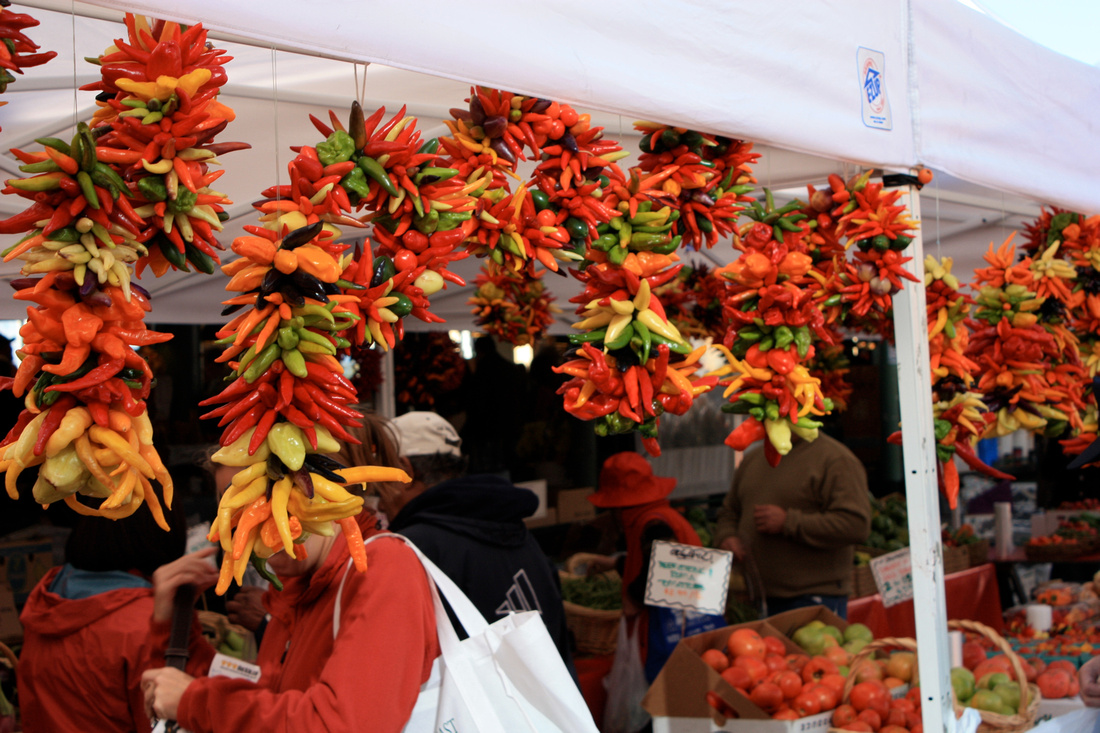 Fish isn’t the only thing for sale at the market, you can buy flowers, peppers, and cheesy touristy crap too. 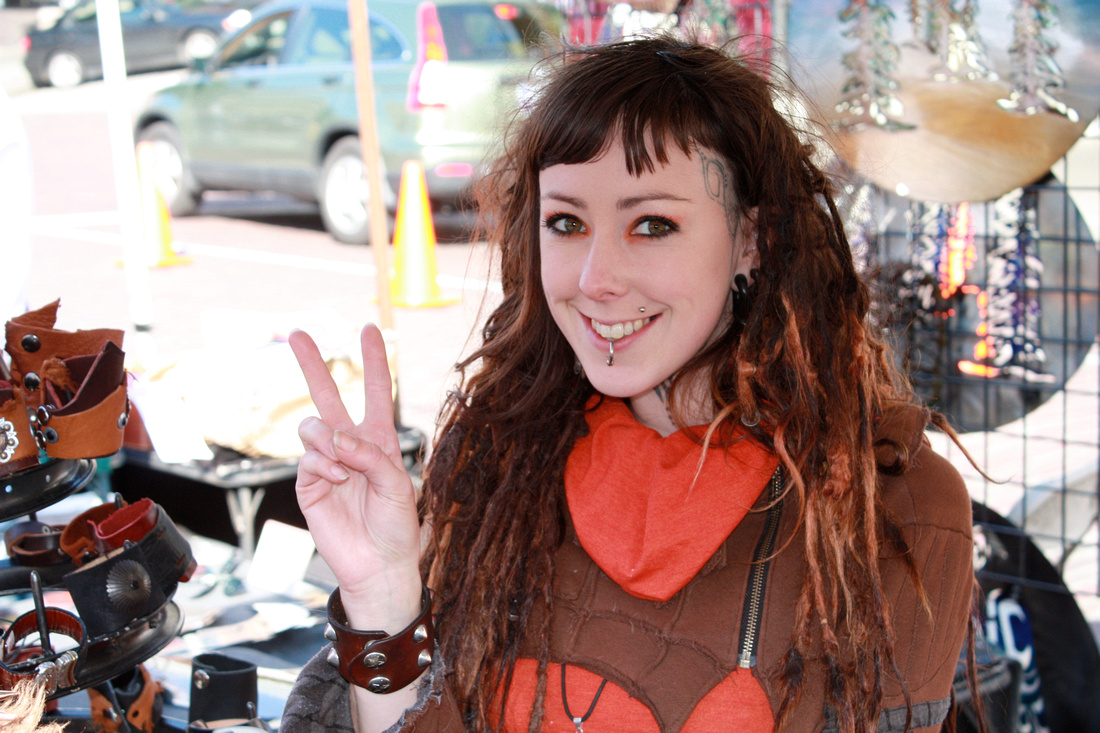 This smiling merchant was selling wrist bands made out of yak leather. Maybe it wasn’t yak leather, I was still suffering from sleep deprivation, and the whole experience was years ago so it’s still pretty fuzzy.

All the shopping made me hungry, and if and I started craving some lunch.  Seattle is known for its outstanding Sea Food (I think they just call it “food” there) so I found a great place for some lunch. 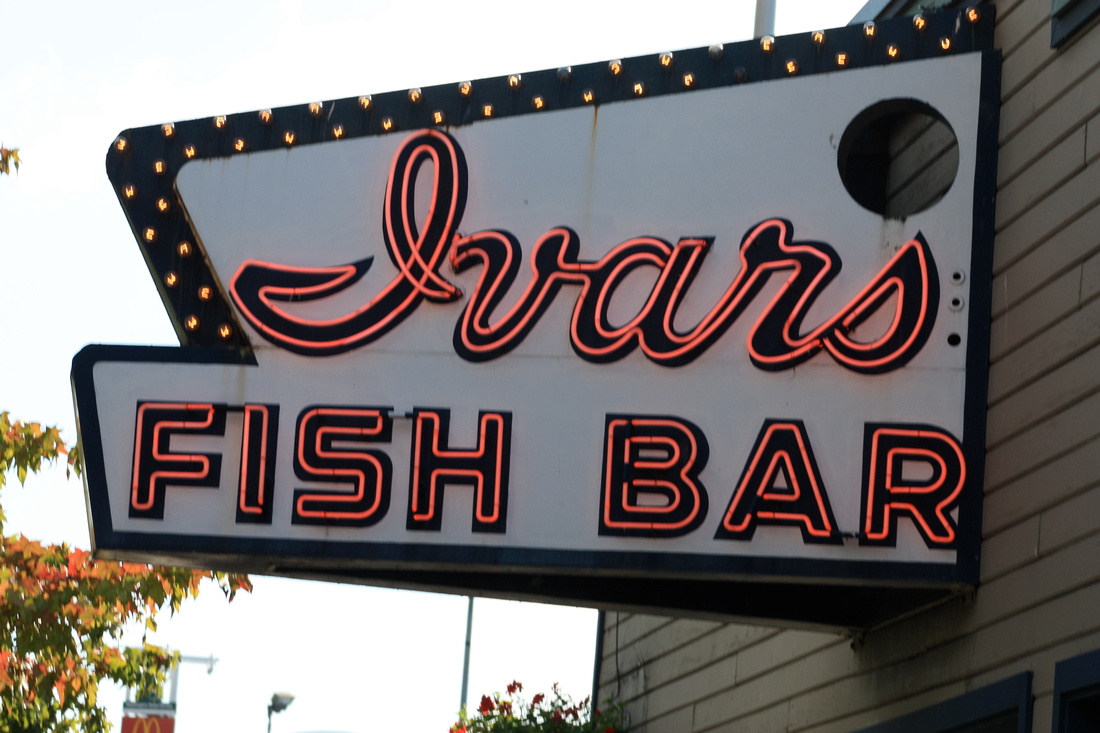 Yum!  Lunch was delicious, but I did have to fight off this fellow who keep trying to steal my food. 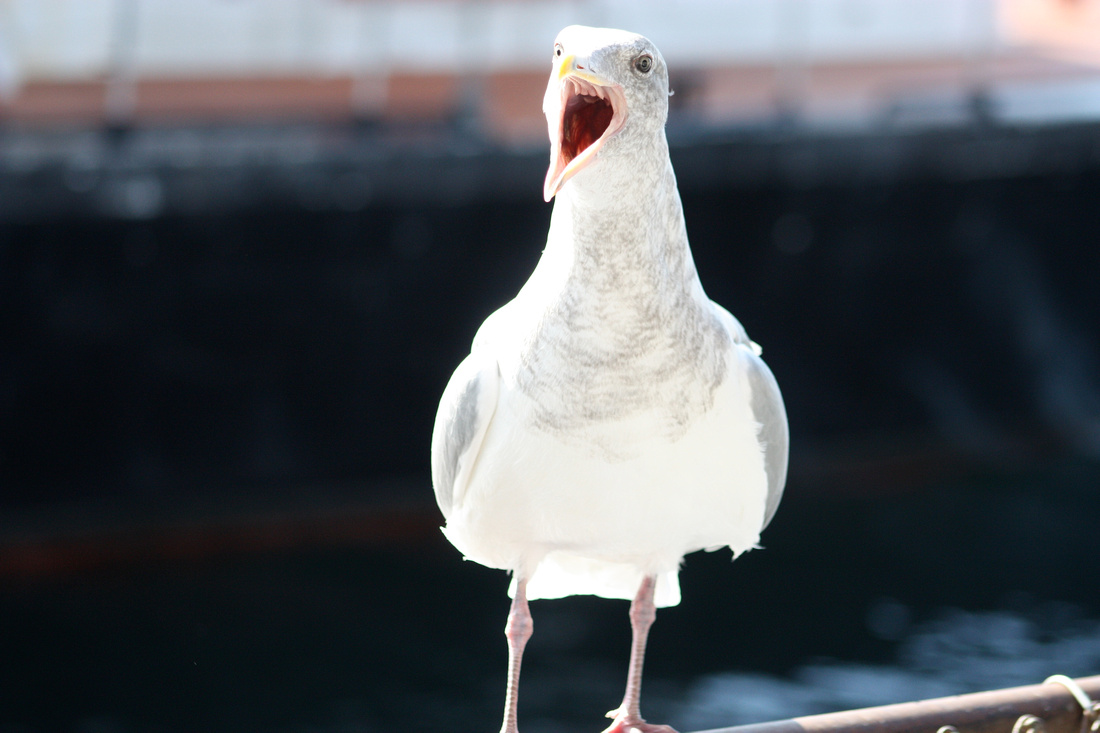 I promise that next blog entry will be another exotic international destination.  With the holidays, company, etc I’ve been away from the keyboard.  I have some great plans for the new year so STAY TUNED!   Happy New Year everybody!