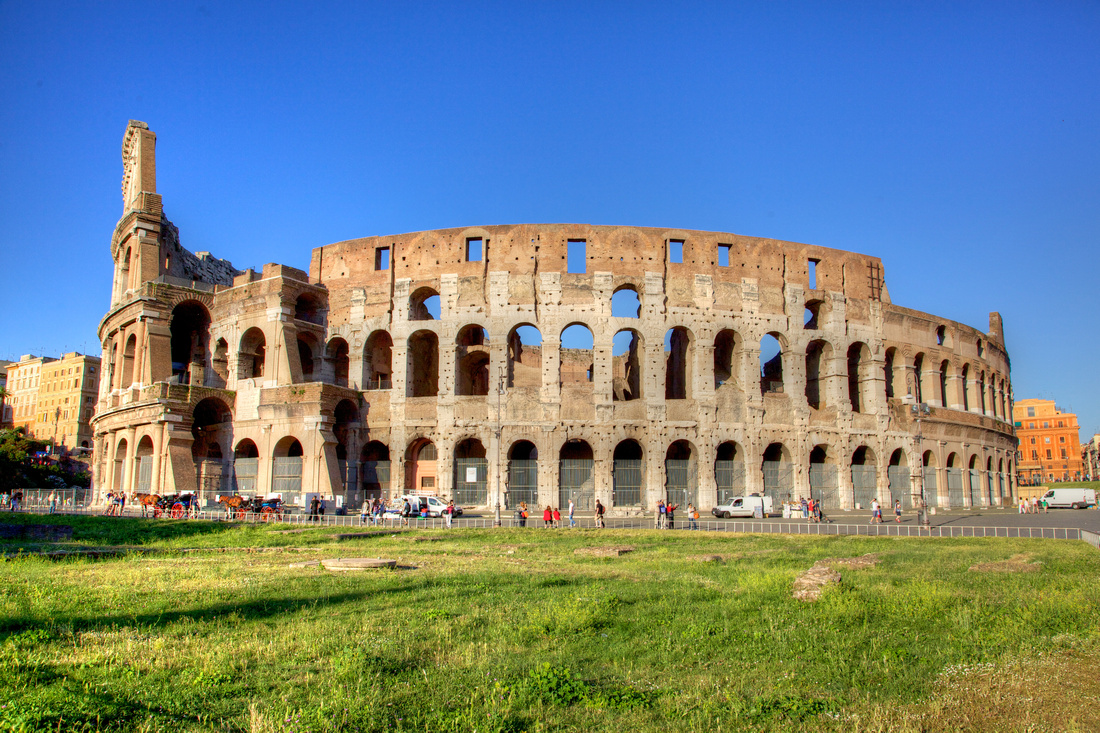 The ancient city of Rome was the last stop on a recent family European vacation.  Larger than all of the other cities we visited, Rome shocked us a bit with its constant motion, busy traffic, and throngs of people.  Granted, we had just spent 3 days in charming Florence, so the contrast hit us pretty hard.  The fact that there was a HUGE Harley Davidson convention (complete with the Pope blessing the company – no kidding!!) didn’t calm things down any.

We enjoyed Rome, but there were a couple detractors that tried to limit our enjoyment of the city.  The first was an attempted pick-pocket of yours truly.  We had arrived by train into Termini, the main train station.  We then had to negotiate the various levels and find our local train/subway that would take us to our hotel.  We were staying at the Courtyard Marriott Central Park on points – free, but located outside the center of town.

Now I travel constantly with work (I fly business jets for a large corporation) and I am generally aware of my surroundings and keep up my defenses to such things as pick-pocketing criminals.  I knew Termini station was famous for Gypsy thieves and I briefed my family before we arrived as to how to secure our valuables.  During our travel between destinations I felt we were most susceptible to crime as we were dragging our suitcases and such with us.  We traveled pretty light – we each just had a roll-aboard carry-on suitcase, and a small bag.  I also had a camera bag with me.  I had an iPhone in a rubberized case and a small money clip wallet in my front right pocket.

As we boarded the subway, a 15ish kid with a messenger bag slung over his shoulder approached.  My "spidey- sense" started tingling a little. He had his arm inside his bag, and he started bumping against me.  I could see his arm extending out the bottom of his bag and he was raking my pocket.  I pushed him away with my free arm and grunted, “Knock it off!!”  He stared at me for a moment and then he and a couple other people suddenly left the car before the door closed.  He didn’t get anything from me, but I ended up with a bit of an adrenaline rush and my mood was wrecked for a few hours.  (A little wine helped with that later.)

We finally arrived at our hotel, dropped off our gear and boarded a shuttle into town.  I wasn’t going to let this event ruin our Rome stay. 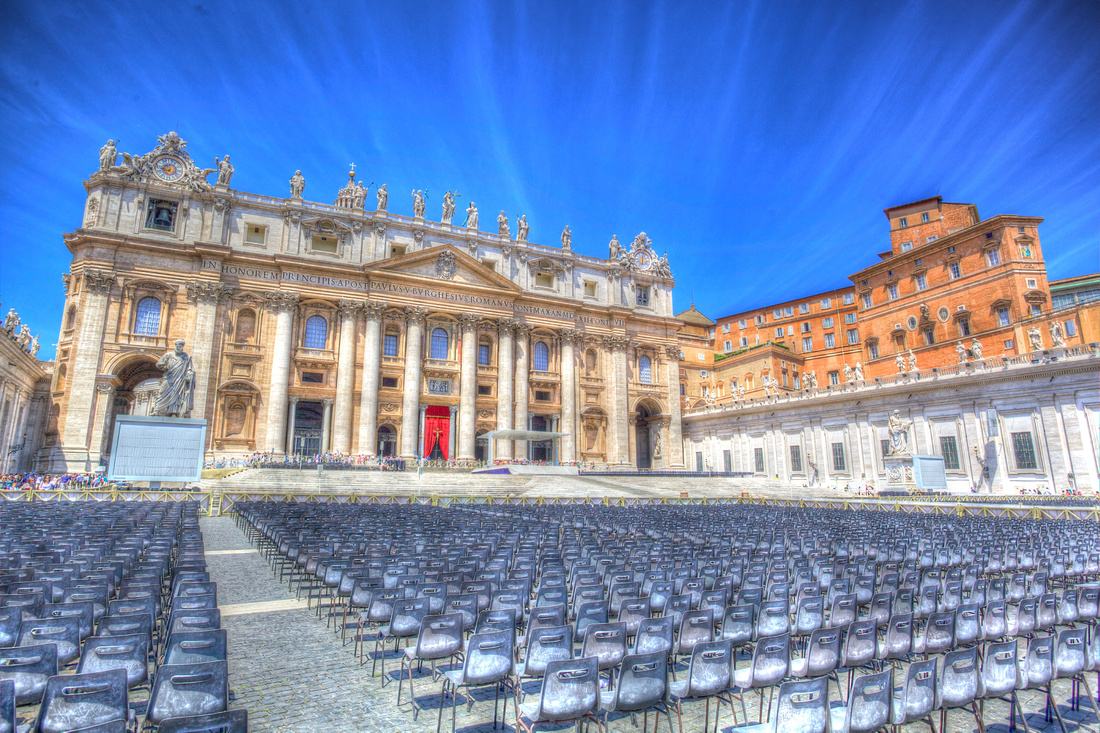 (HDR shot of the square in front of St. Peter's Basilica.)

The shuttle dropped us off right in front of Vatican City, and we started a long day of walking by entering the amazing “country within a country.” 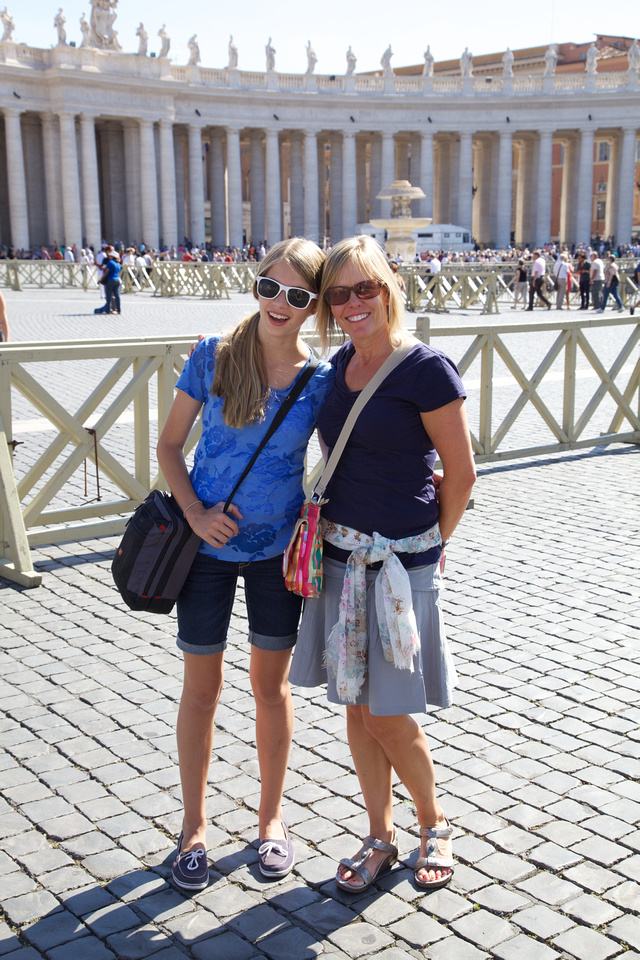 (My girls in Vatican City)

We had a semi-private tour of the Vatican in a couple days, so we were just doing a “fly over” on our first day.  After looking around a bit, we departed Vatican City and headed off into Rome proper.  Our first stop was the Pantheon. 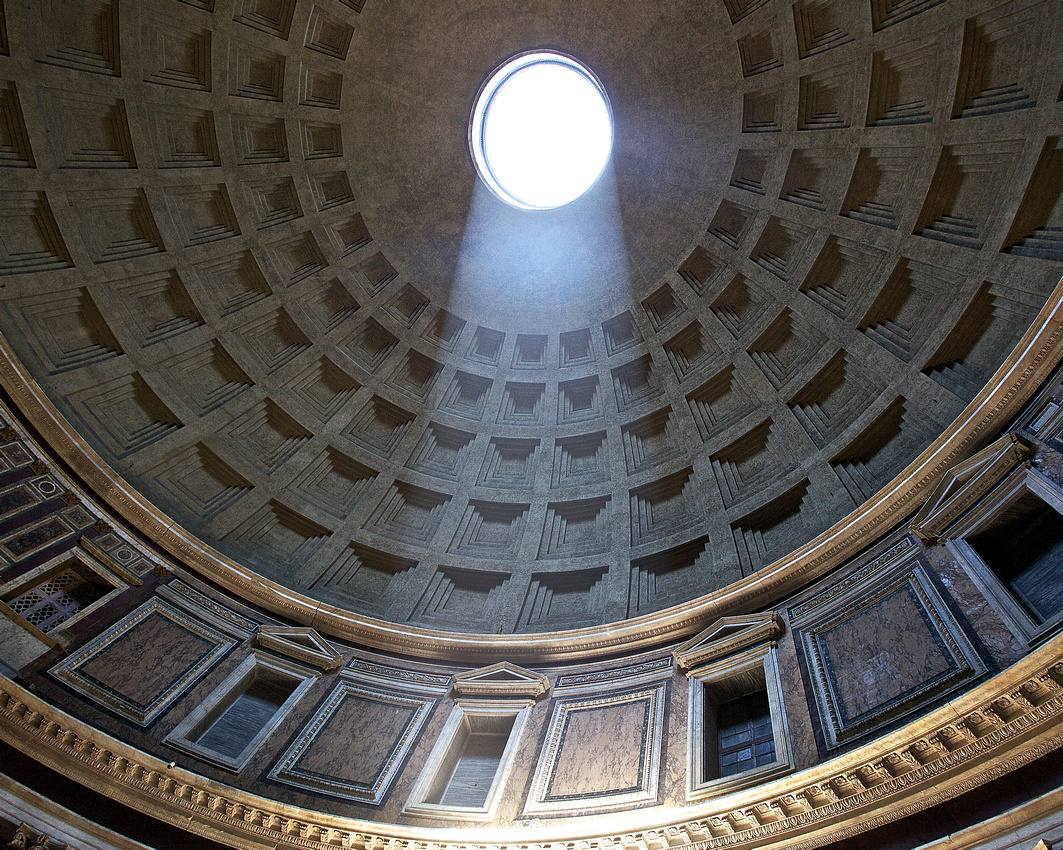 The Pantheon is one of my favorite ancient structures.  This dome was built over TWO THOUSAND YEARS AGO!  An engineering masterpiece, the fact that this dome is still standing never ceases to amaze me.  Originally built as a temple celebrating all (hence the root “Pan”) the gods of ancient Rome, the Roman Catholic Church acquired  it in the 7th century and made it one of their churches. They removed the Roman god references and added their own.  The hole at the center of the dome is called the Oculus and the light streaming through the Oculus has been called the finest column in Rome.  The light is quite spectacular.

Frescoes and statuary fill the ancient room.  My daughter loved this fresco: 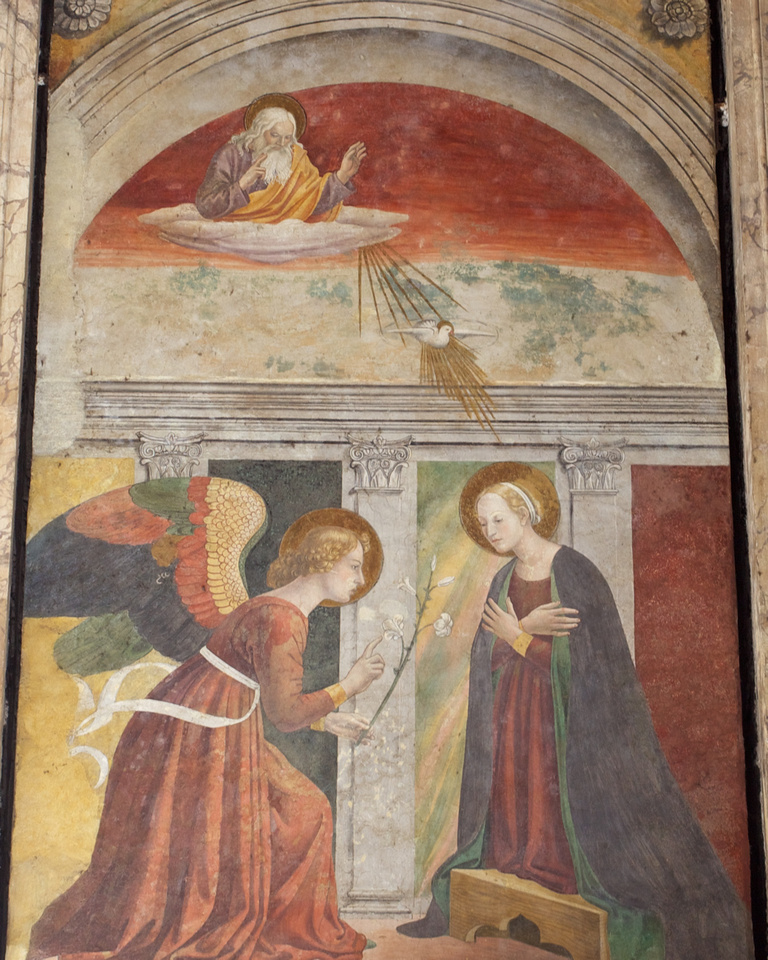 She called it the UFO painting.

After exiting the Pantheon and finding some gelato (A never ending quest in Italy) we set off in search of the famed Colosseum.  First, however, we spotted the forum.  (Which is nothing like the Forum shops in the Las Vegas version of Caesar’s Palace.) 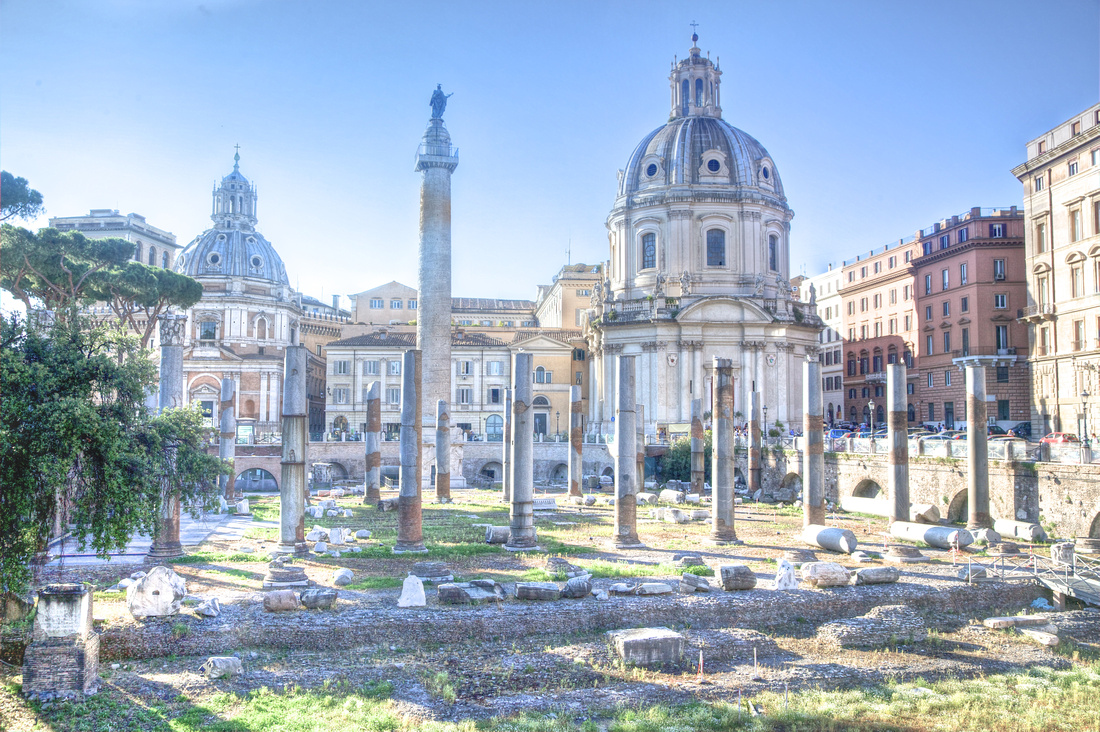 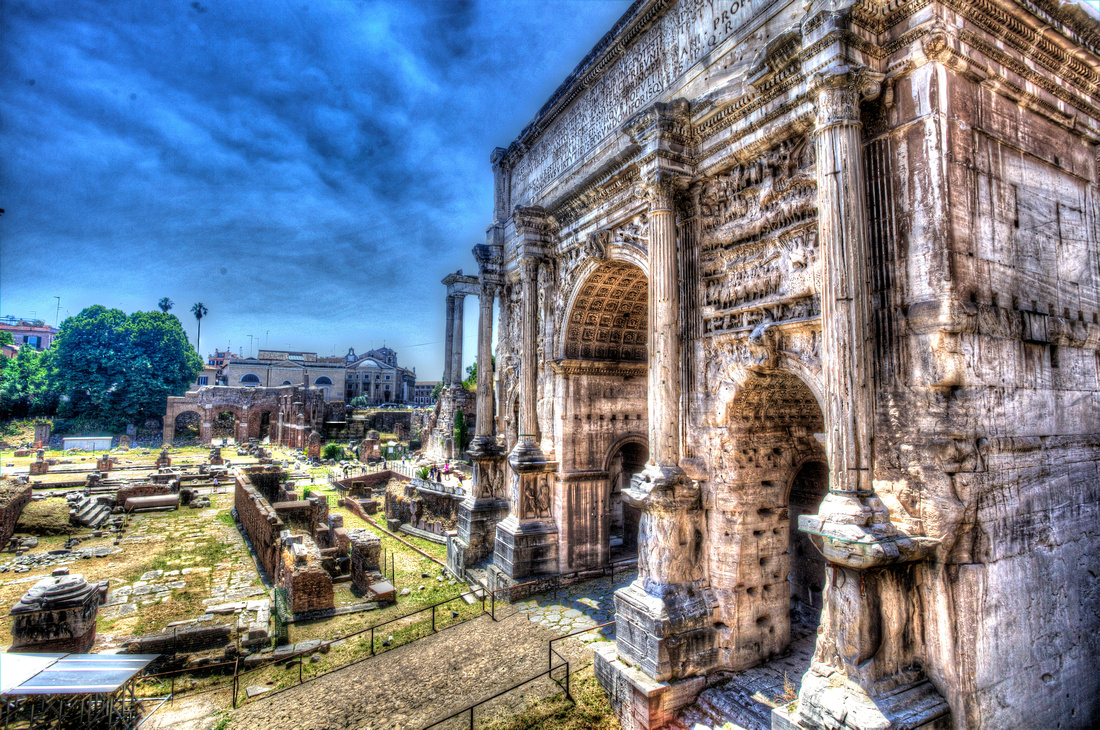 I love how Rome has preserved the ancient structures in the middle of modern areas.

It was hot, humid and we were pretty tired of walking all the way across the center of Rome.  As it was time for dinner, we jumped in a cab and headed back to the hotel.  The next day we traveled back to the Colosseum for a proper tour of the arena. 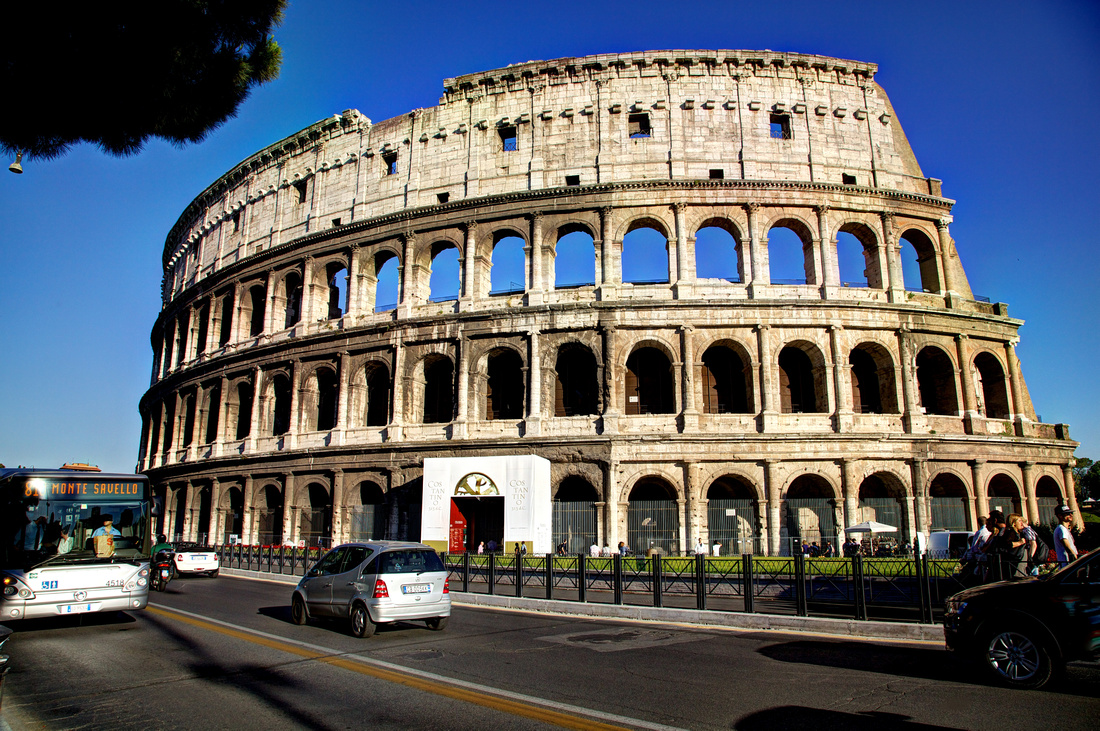 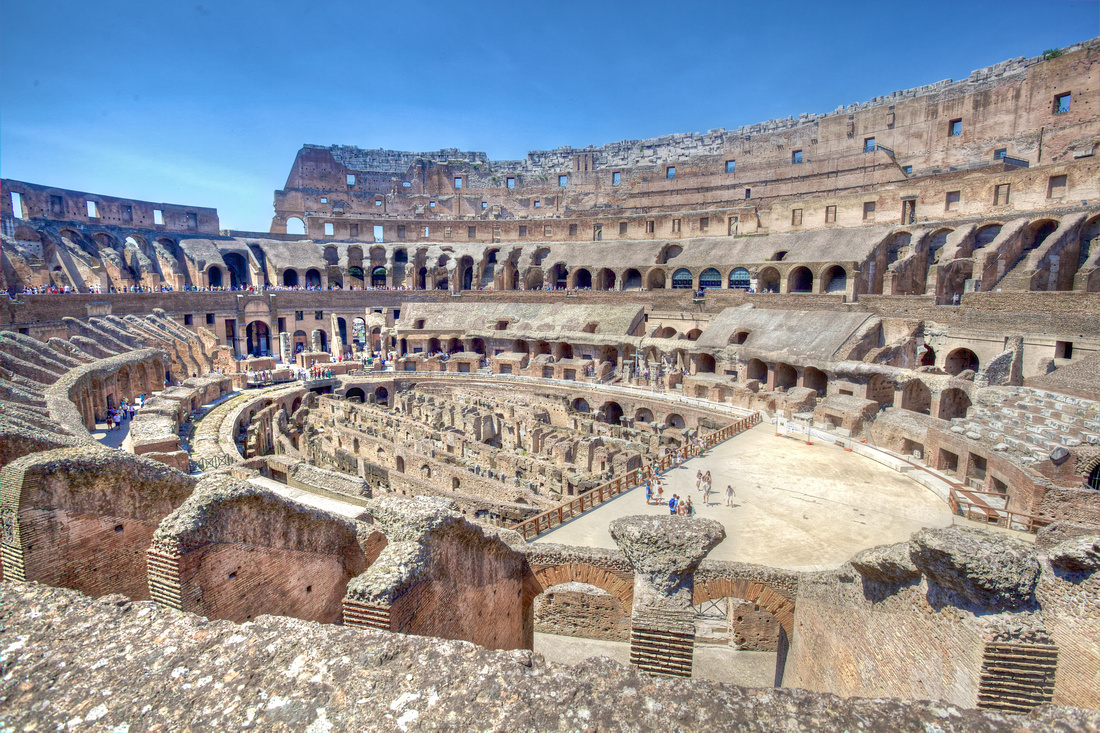 (HDR of the inside of the arena.  Here they have partially built the floor so visitors can see what it looked like before the floor disintegrated.) 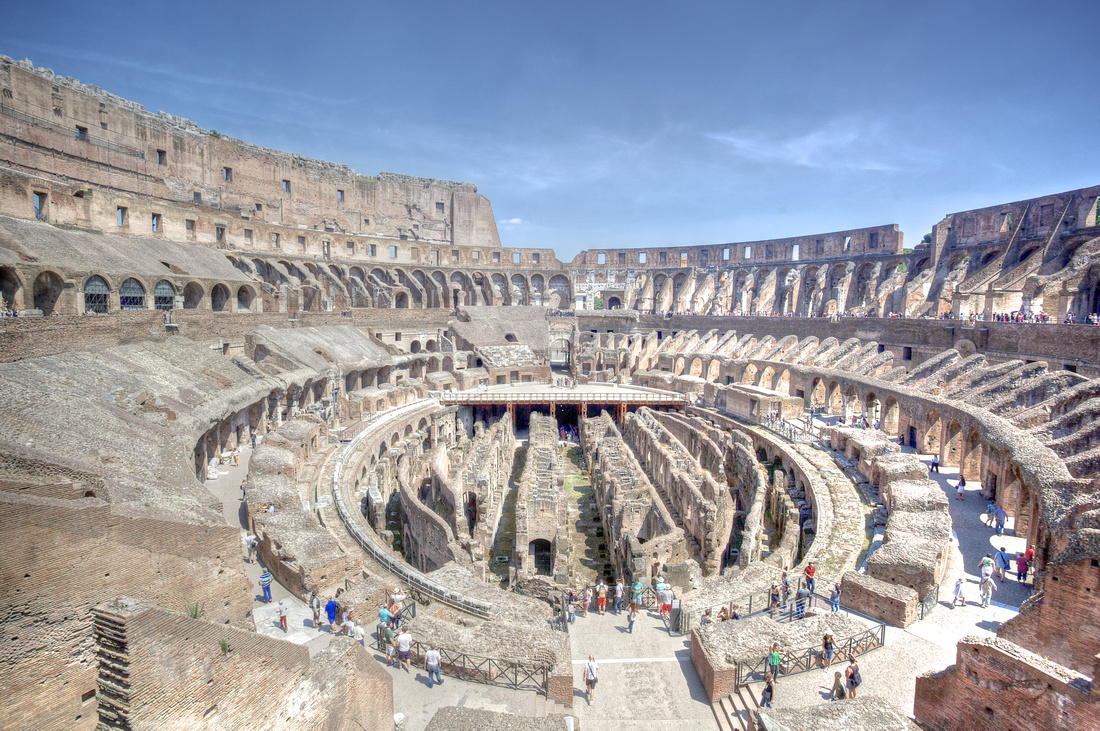 The scale of the Colosseum amazes me.  It’s the size of a modern sports arena – built by hand 2000 years ago.  It used to be adorned with marble, but everything but the rough stone was “recycled” into other buildings long ago.

The next day we had our Vatican tour. 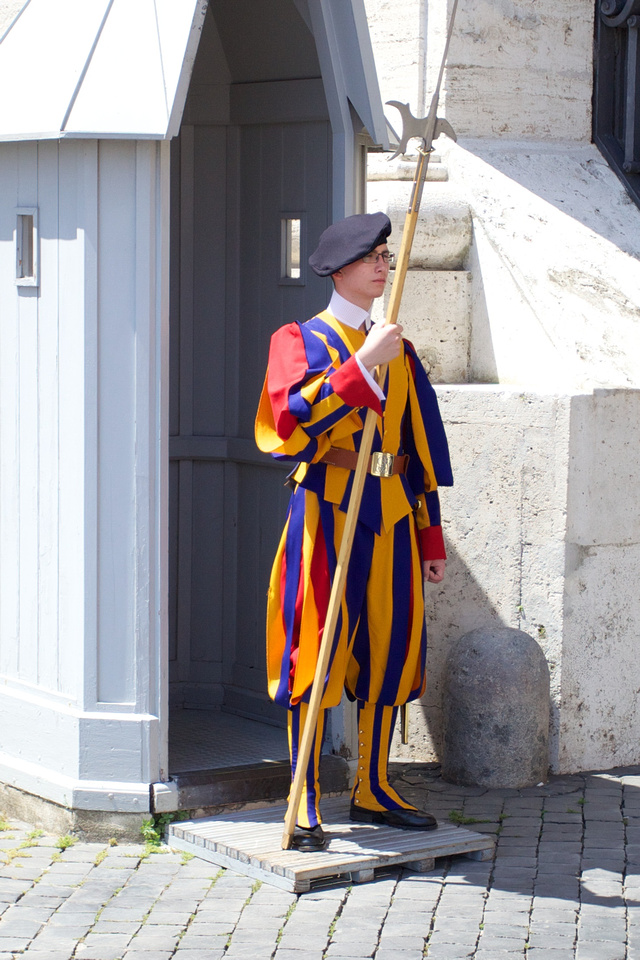 The Swiss guard boasts unique, colorful uniforms.  (Italian camouflage?) I just hope my boss doesn't get the idea to design our uniforms like these..

There are a zillion people who live in Rome, during the summer at the height of the tourist season that number has to double.  EVERYBODY wants to see the Vatican museum and Sistine chapel.  The only way to see these without standing in line for 6 hours is to book a tour.  Walks of Italy offers an excellent tour with knowledgeable and charismatic guides. 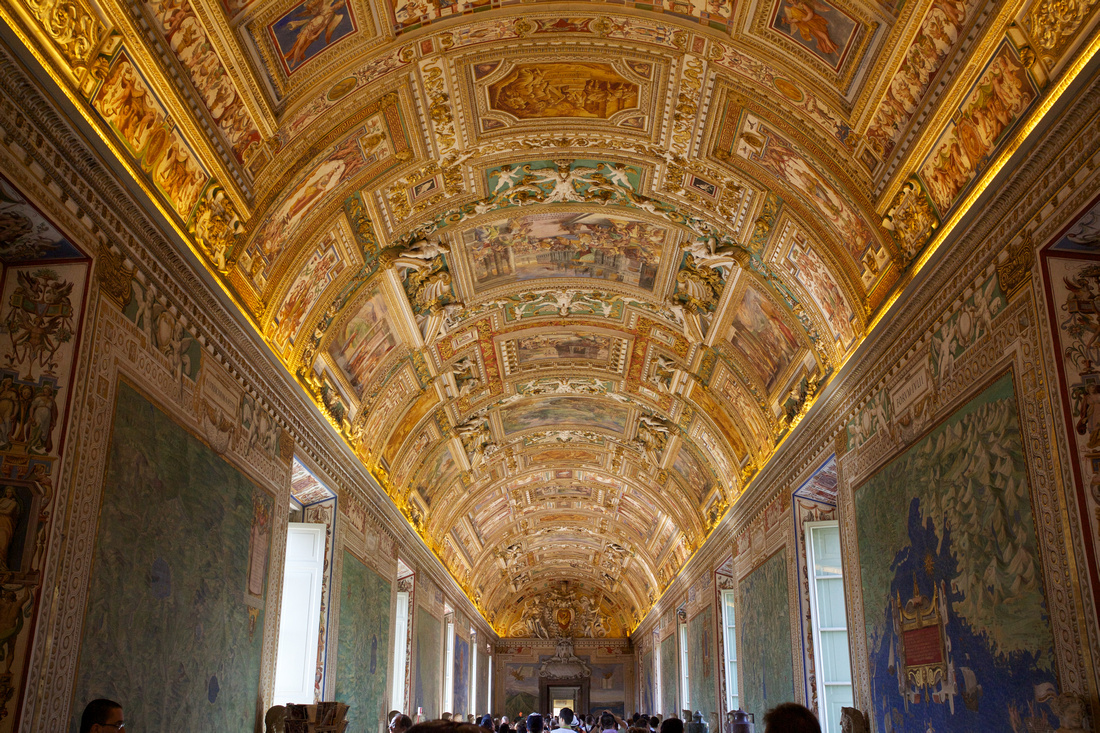 Our Walks of Italy guide, Camilla, was a treasure-trove of information on all things Vatican and art and didn’t cease to talk on our 3 plus hour tour.  A huge benefit to booking the tour we did was that we were given access to the Sistine Chapel before it opened to the general public.  If you go to Rome and want to really see the Vatican and learn about its treasures – book a tour with Walks of Italy and ask for Camilla.

We had one more day in Rome before heading home, and we had a few highlights left to explore.  Rome is famous for its system of aqueducts (not “aquaducks” as I initially tried to spell it) that bring water into the city.  Many of these ancient waterways were destroyed, but a few remain and continue to bring water into the city to this day.  Rome in the summer is hot and humid, and the need for water is pretty high. (You can’t survive solely on wine – though I’m sure many have tried.)  Throughout the city you’ll find random water spigots with flowing water.  While I was a bit suspect at first, the water is clean and safe to drink. 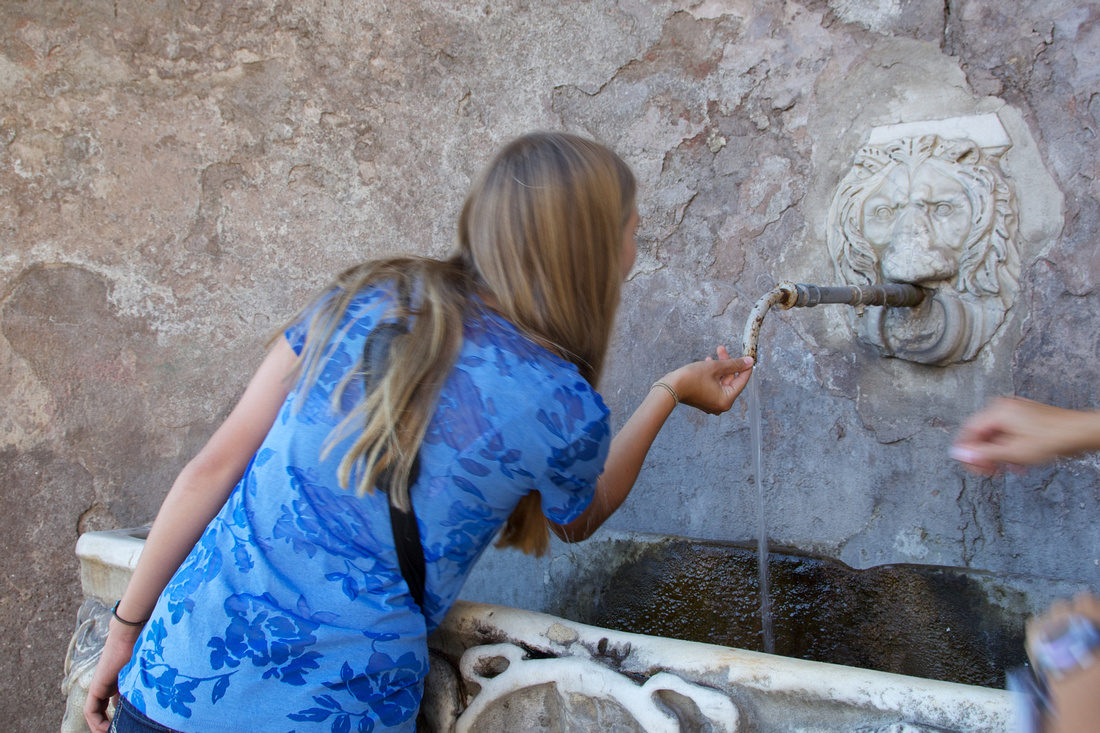 (One of the many drinkable water fountains in the city.  The trick is to plug the end and water will shoot out a hole on the front.)

At the end of the largest aqueduct is the famous Trevi fountain. 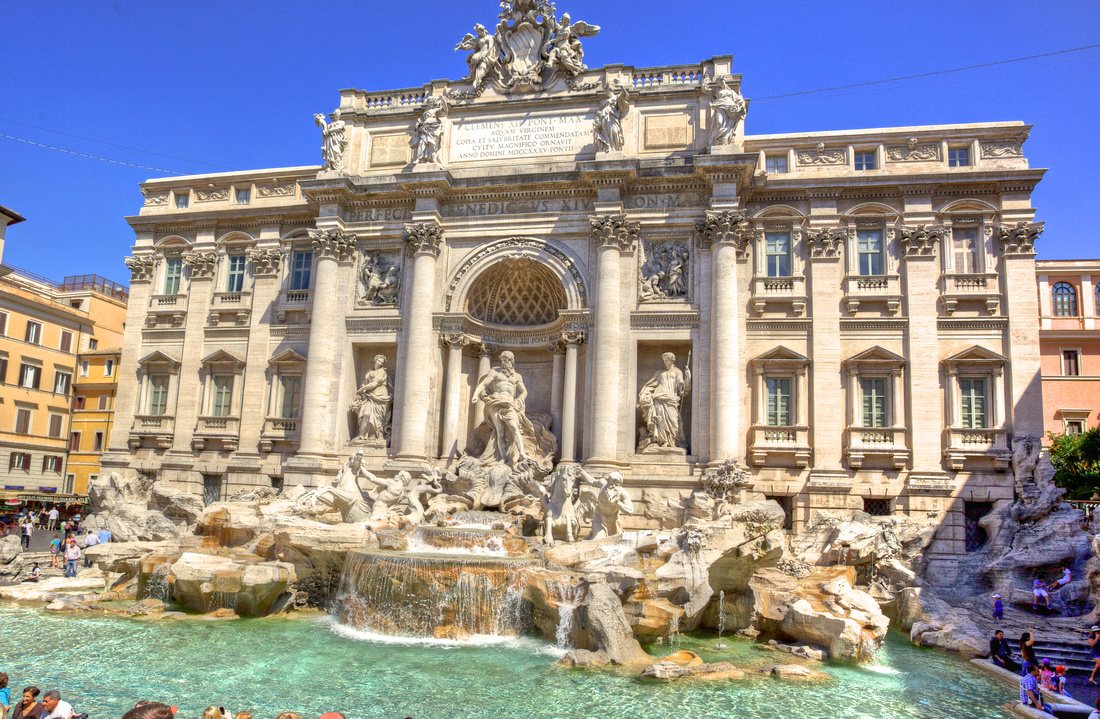 Despite the pick-pocket attempt on our arrival, we enjoyed our stay in Rome.  The history is everywhere and amazing sites are around every corner.  I enjoyed getting lost wandering around random streets and alleys.  The many old walls make great backgrounds for portraits.  Here is my daughter posing in front of an interesting orange wall. 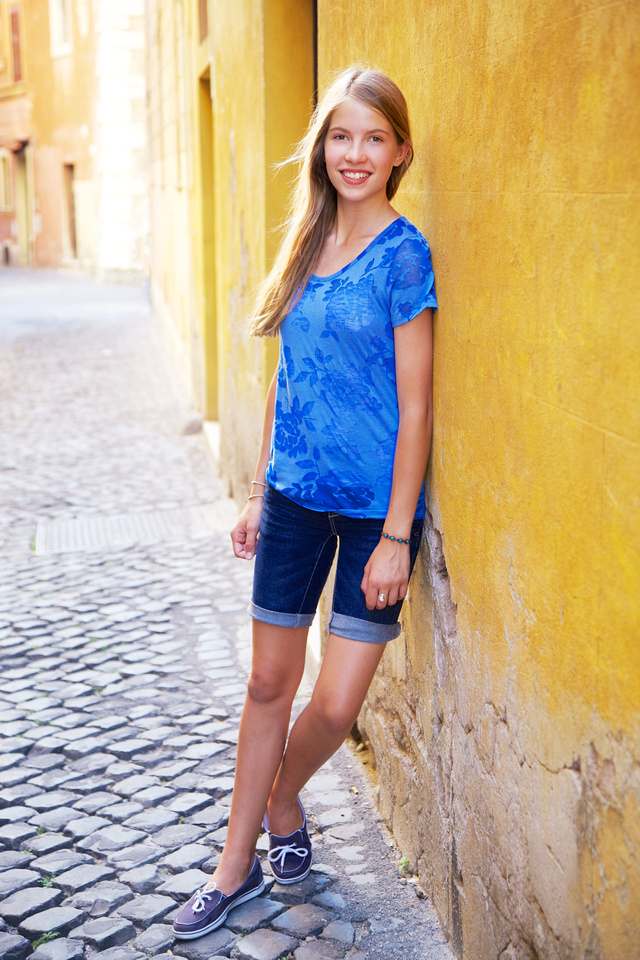 Rome has everything to offer to the photo-tourist.  Great ancient buildings, priceless works of art, and amazing fountains are everywhere.  Guess what I’m going to miss most? 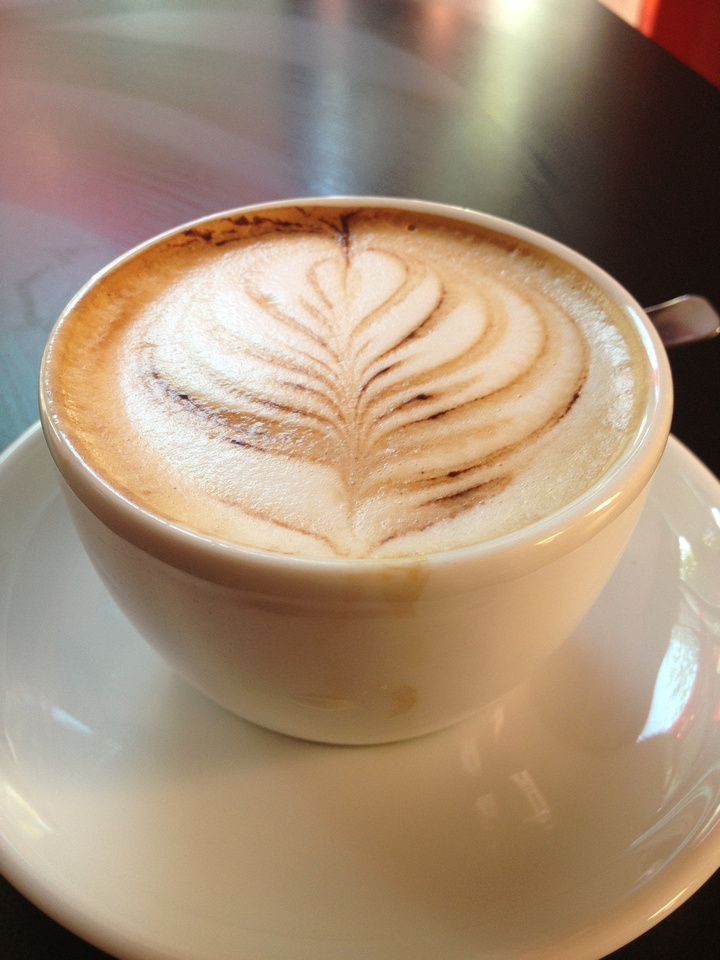 My wife, Heidi, had her favorite cappuccino there too: 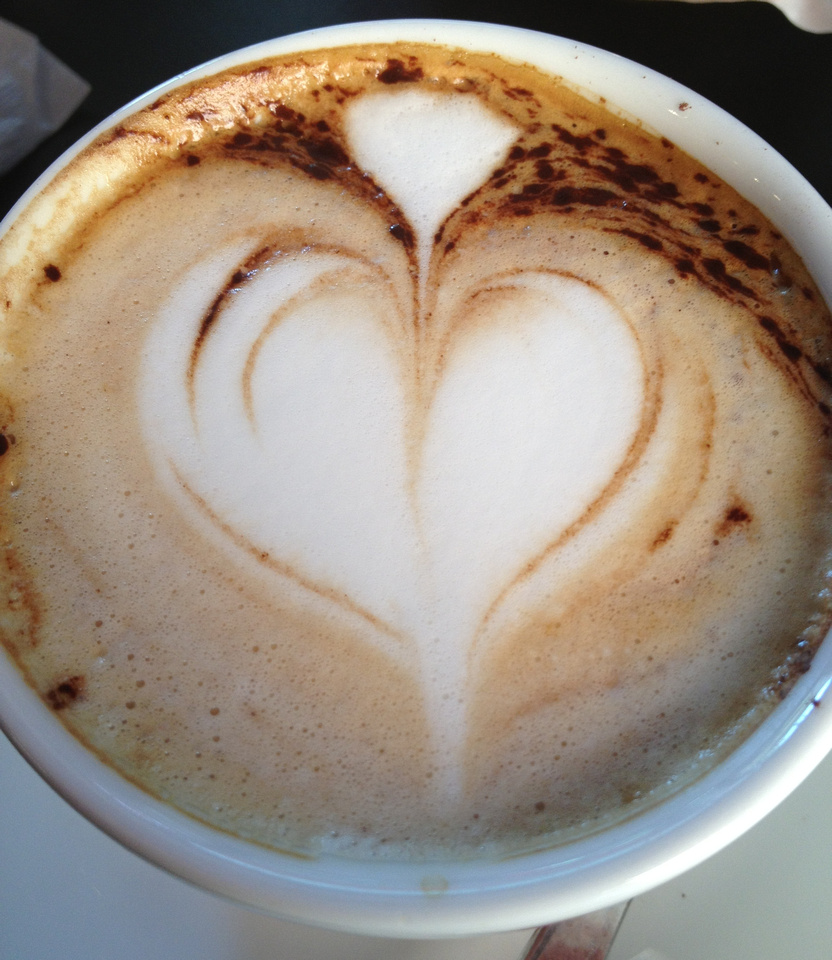 I already want to go back….  Arrivederci Roma!