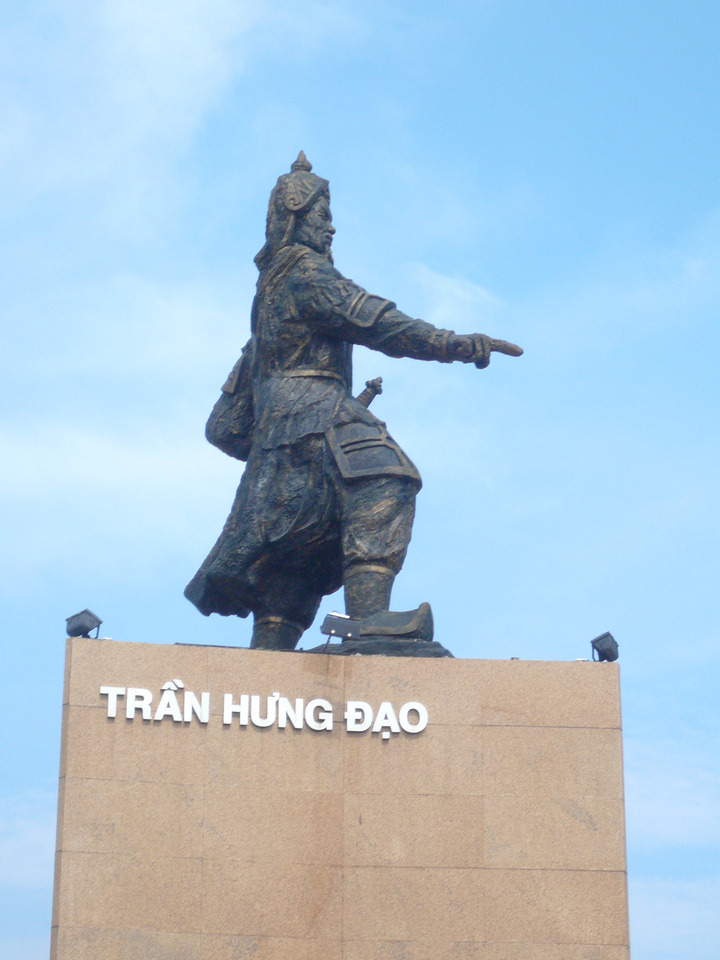 “Back when I was ‘Nam….  “  I can actually say that.  In 2007 I had the opportunity to visit Hanoi and Ho Chi Minh City (Saigon) on a work trip.  (When I’m not taking pictures I fly business jets for a major corporation.)  Ironically enough, the other pilot I flew this trip with used to be a Marine A-6 pilot and operated over Vietnam during the war.  It was interesting to see his reactions and feelings while we were there.

In 2007 I really hadn’t studied photography yet and the camera I was using was only about a half-step above a toy.  Please excuse the quality of the images; however, I still think they convey some of what it feels like to visit this southeast Asian country. 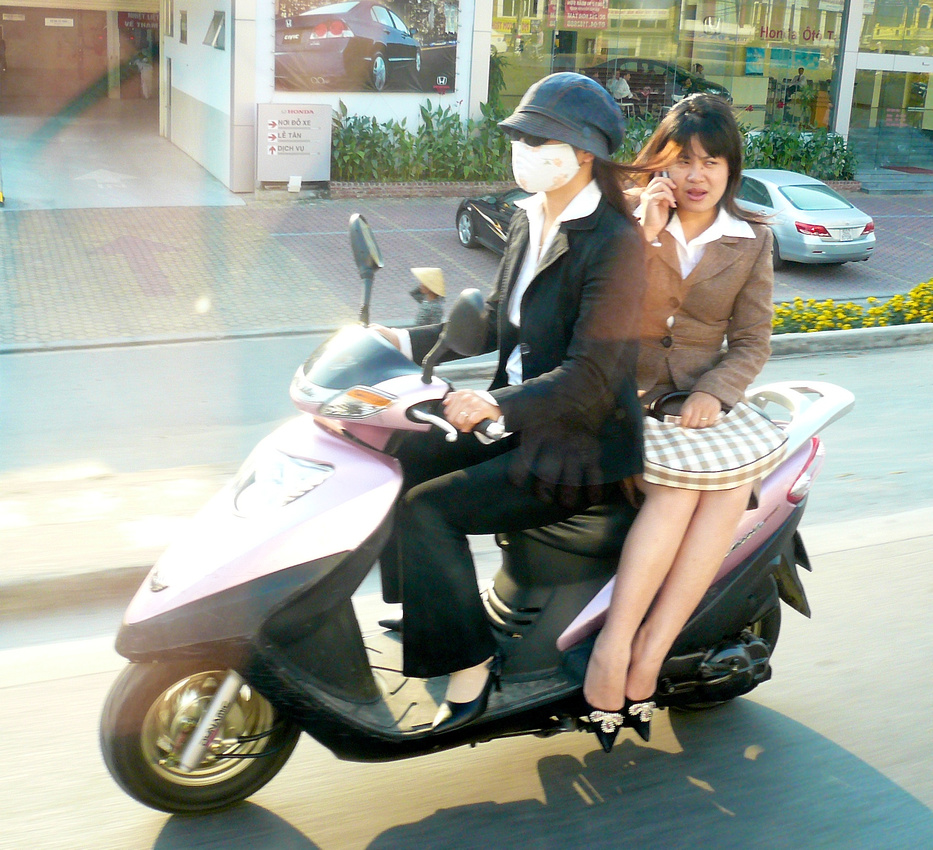 The first city we flew into was Ho Chi Minh city (old Saigon.)  I’ve been to most Asian countries, but NEVER in my life have I seen so many scooters.  They must issue every Vietnamese citizen 2 scooters when they are born.  On the ride from the airport to our hotel we spent the whole time with our noses pressed against the windows trying to win the “who can spot the most outlandish thing on a scooter” contest.  (The winner was our mechanic who spotted a scooter carrying 12 pigs in cages strapped to the back.) 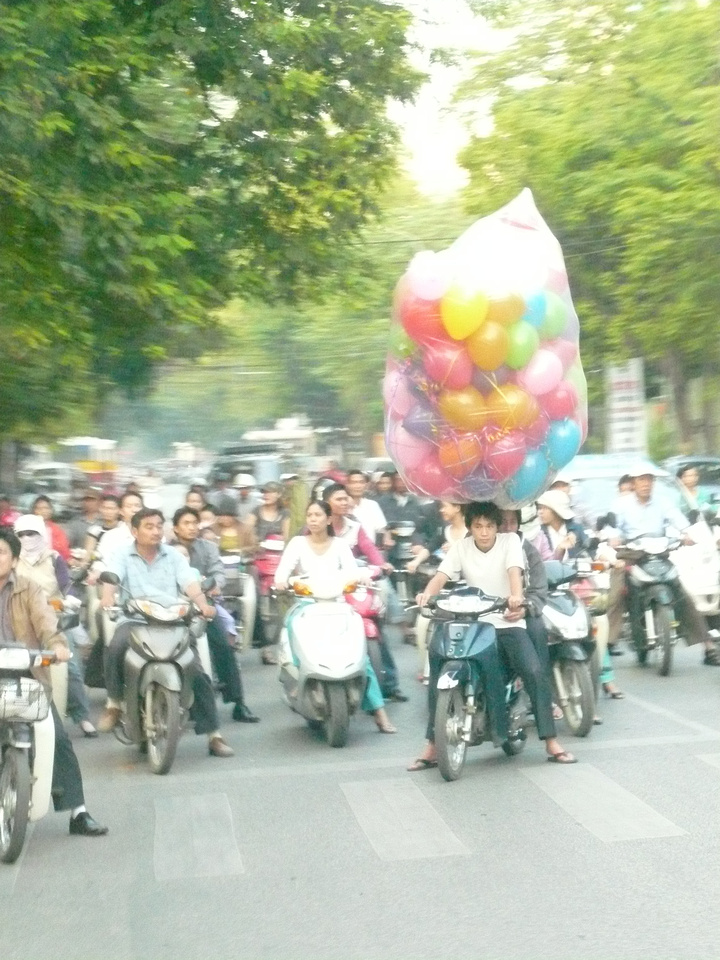 Here we see an ingenious young gentleman who devised a method to increase the lifespan of his tires by reducing the overall weight of the structure.

Our hotel was right next to the famed Saigon River, and I think I discovered where some of the scooters come from.  I noticed a ferry boat approaching a landings and shot a little bit of awful video:

Check out how many scooters offload from the ferry.

Much has changed in Vietnam since the years of war.  Danger, however, remains present – although the form of this danger has morphed.  Today, this danger manifests itself through the seemingly benign task of crossing the street.  For the most part, Vietnam doesn’t bother with traffic signals, signs, or rules.  The streets are often free-for-all mob rule.  Crossing the street there scared me more than landing a jet in mountainous terrain at night in a thunderstorm.  I remember a couple of us stood at an intersection for 10 minutes trying to figure out how to get across.  Finally an old lady showed up and started to cross.  We followed her, letting her part the streams of the vicious two-stroke monsters.

I learned the Vietnam street-crossing technique.  You must move slowly, yet steadily in a über-predictable manor.  The scooters will adjust their track as to miss you by at least 6 inches.  Don’t speed up, don’t slow down – a brief "head fake" can cost you a kneecap.  Most important of all: Don’t show fear.  (They can smell it.) 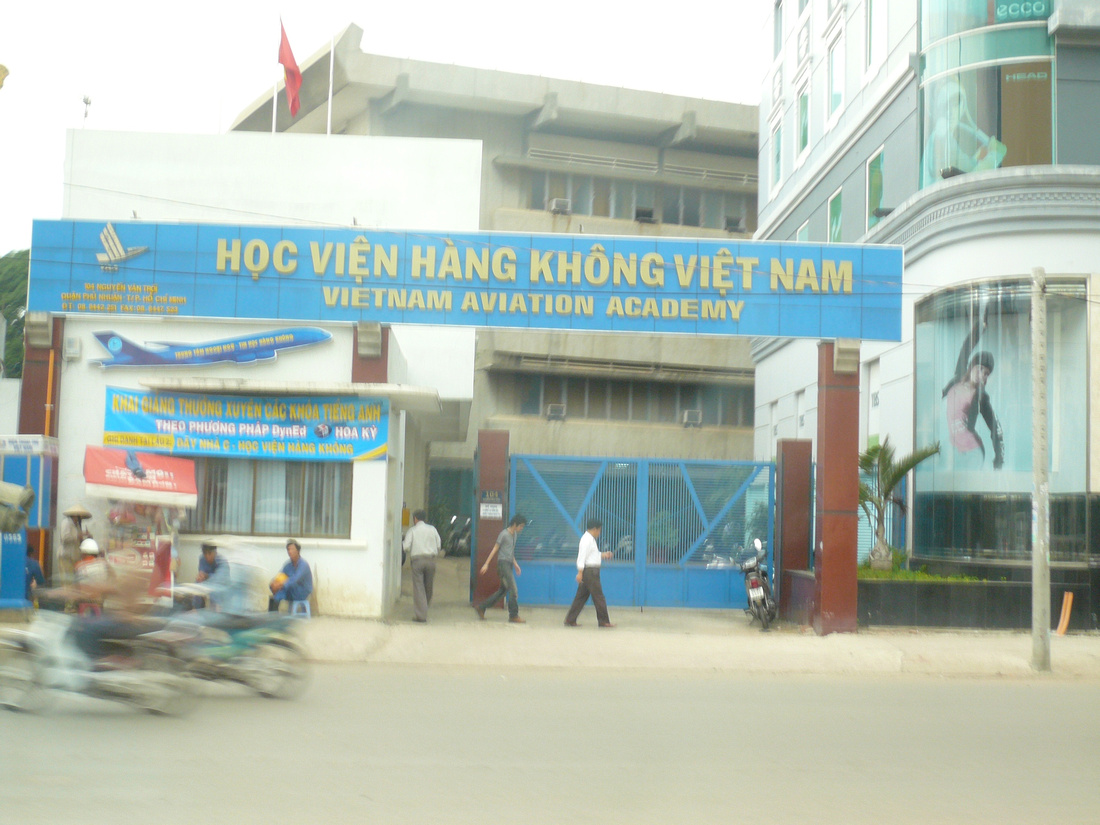 After 1 night in Ho Chi Minh City we flew north to Hanoi.  I grew up right after the Vietnam War and I know how it affected our troops who served there.  I was looking forward to see what this city feels like today.  Ironically, our hotel was the “Hanoi Hilton.”

The Hilton was very nice:  large rooms, Starbucks downstairs, etc.  This is definitely not the “Hanoi Hilton” POW prison that housed the likes of Admiral Stockdale.  THAT “Hanoi Hilton” is actually the Hỏa Lò Prison and is basically a museum now. 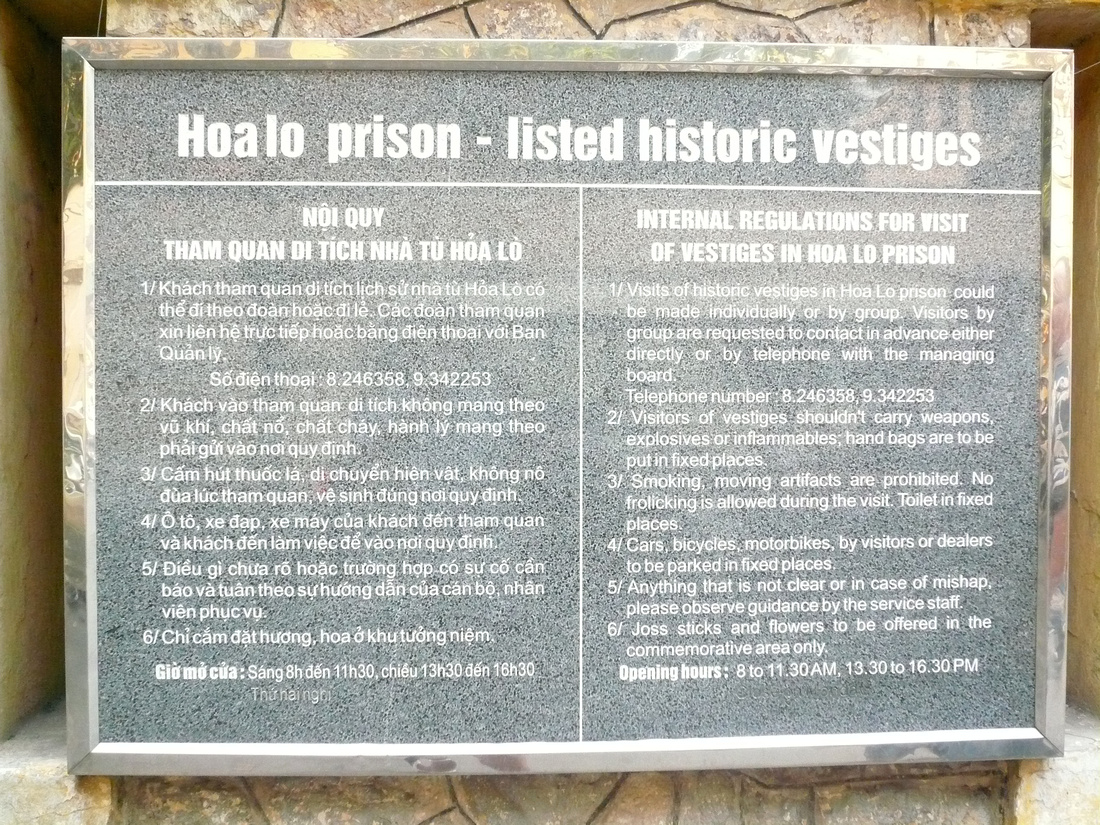 Reading the various propaganda signs that virtually litter Hanoi can be upsetting.  I’m a Navy vet and I’ve heard first hand some of the atrocities committed against our troops in this small country.  When you read a sign in the lobby of the Hỏa Lò Prison that says the prisoners were treated so nicely that they opted to call the prison the “Hanoi Hilton” – well, let’s just say it can cause one’s blood pressure to increase a bit.

We were given a tour of some of Hanoi’s highlights.  At one point of the tour our guide led us to a cesspool in the middle of a neighborhood that still contains wreckage of a B-52. 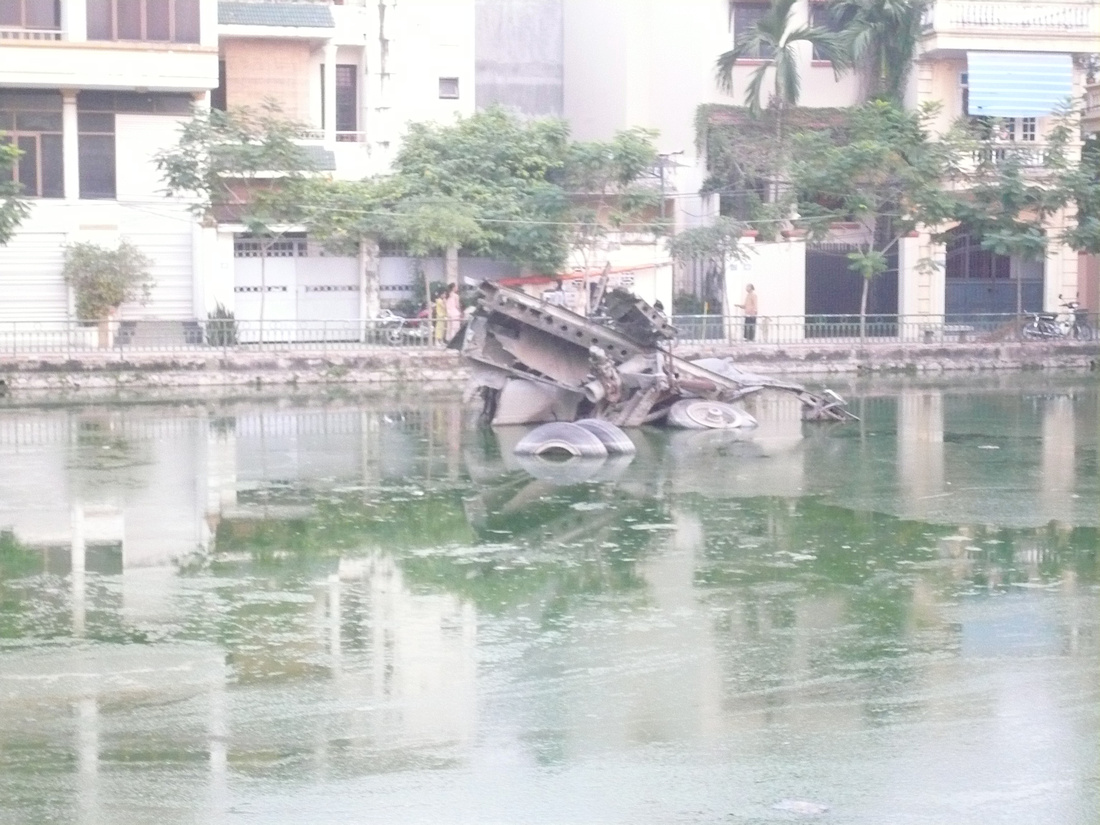 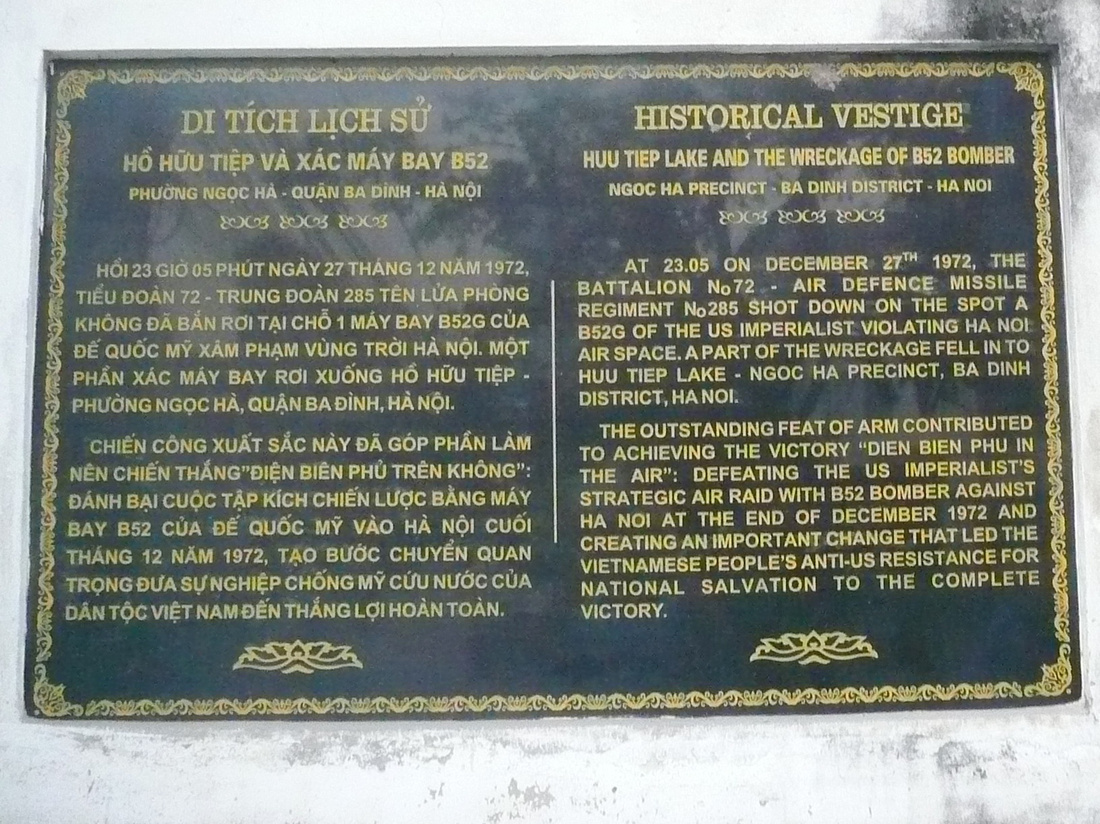 I don’t want it to sound like this trip was a somber revisiting of the Vietnam War.  It wasn’t.  I found the people of Vietnam to be happy, vibrant, and positive.  The country is doing well, and the economy is building.  As usual, I made it part of my mission to sample the local barley product.  (Something every good visitor should do.) 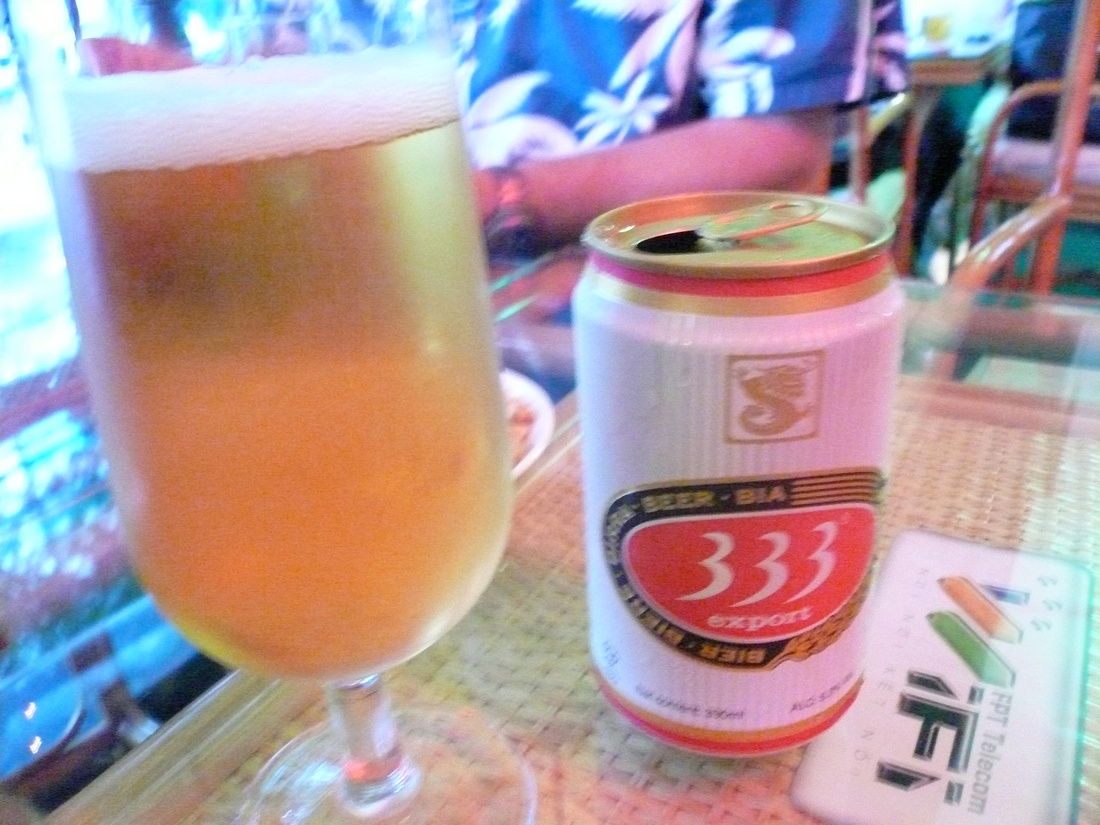 According to Cliff, my fellow crew member who was actually a part of the Vietnam War, they used to drink 333 beer after missions.  It goes down very well after walking in the stifling, oppressively hot and humid environment.

Walking through the city we came upon a young lady taking a private badminton lesson.  I play a lot of tennis, I’ve taken several tennis lessons and watching this badminton session cracked me up.

Our stay was pretty short – 3 nights, 2 cities.  I enjoyed what I saw, and would definitely visit again if given the choice.  I wish I would have taken some photos of the food.  (Would that be called a “Pho – to?”  Sorry, had to be done.)  The food was delicious and plentiful.  The prices were very reasonable, and if you get away from the hotel restaurants and bars you can go a long way with 10 dollars.  I’d like to take my Canon dSLR to Vietnam the next time I’m fortunate to visit.  If I do, I’ll revisit the blog. Moat hi bah, yo! 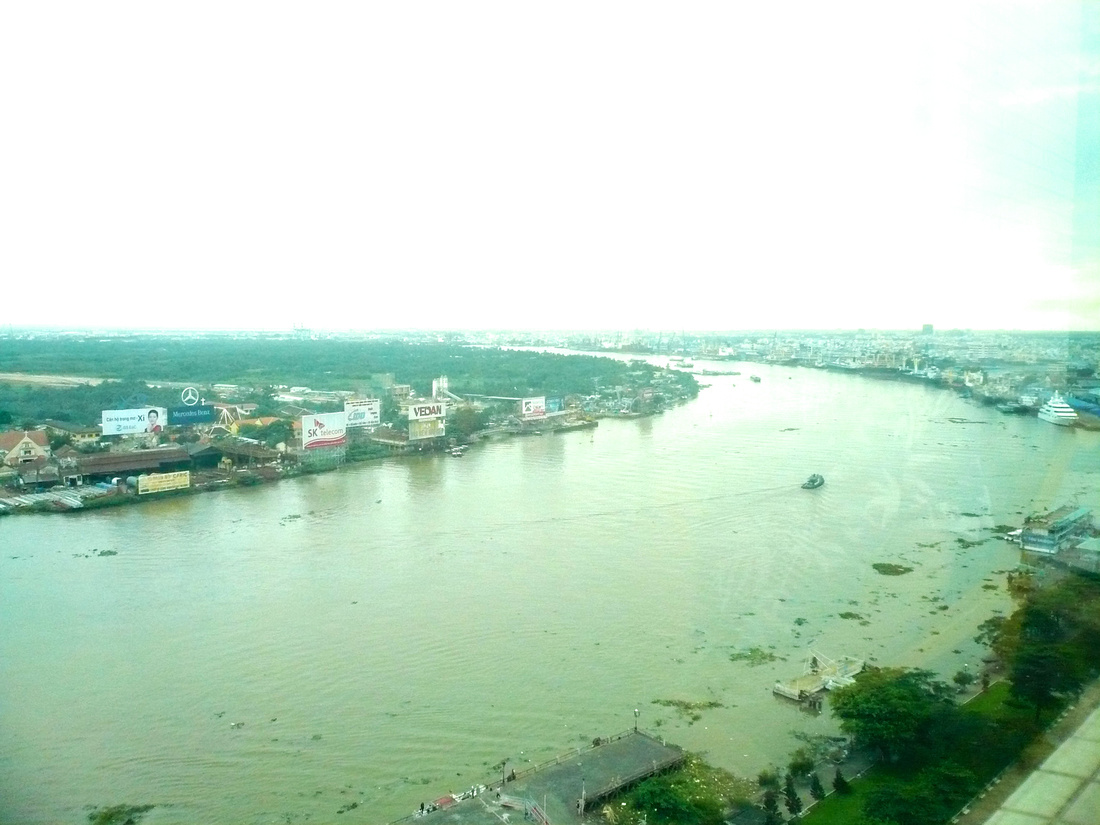