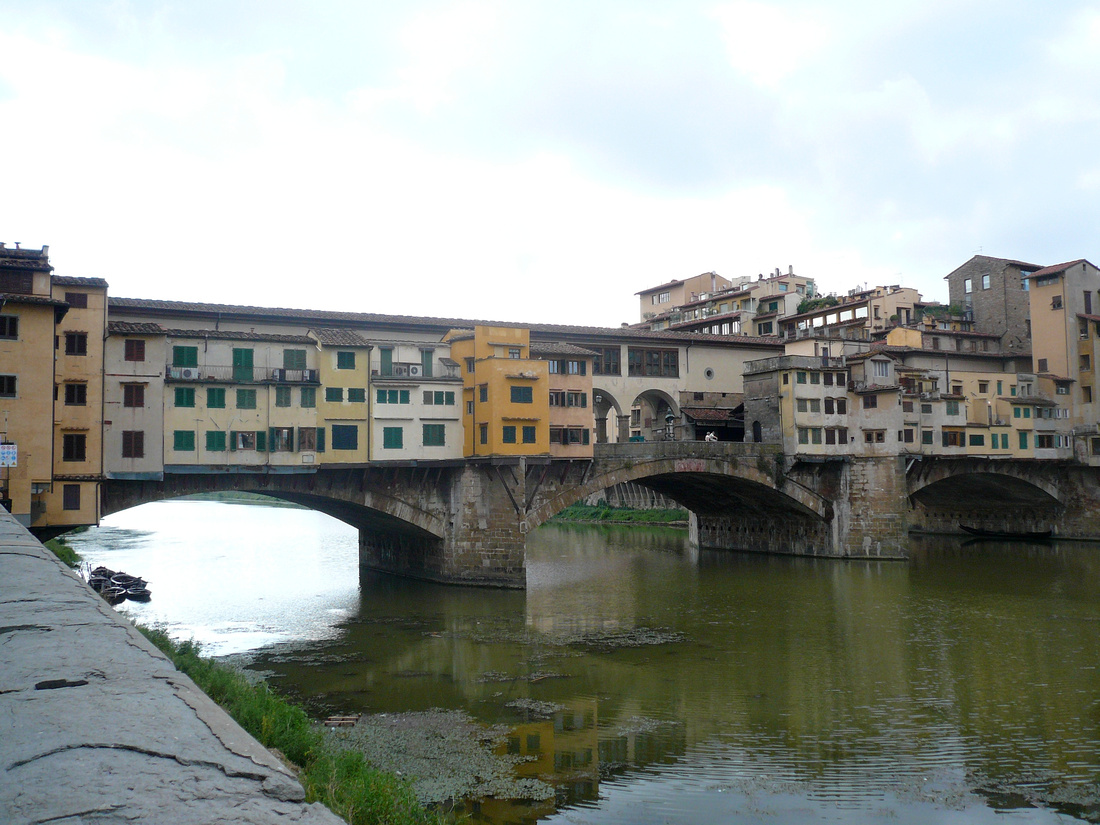 Ahhhh Florence, Italy.  My second favorite destination so far. (Dubrovnik is number 1.)  On this arduous business trip, I found out I was going to be spending 3 nights in the heart of the renaissance and I was excited.  I’d always heard of Florence, but never thought I would have a chance to visit.  My other job as a corporate pilot has me traveling the world, but our destinations aren’t usually as interesting as Florence.

I picked up the Rick Steves book on Florence/Tuscany and started preparing for the trip.  We were going to be there in the Summer, so we were going to have to deal with the crowds.  (I’m not much of a “crowd” guy, but occasionally I’m willing to take one for the team.)  I read that the statue of the naked dude was a must see. (Michelangelo’s David) and the Uffizi Gallery couldn’t be missed.  I’m kind of museumed out from my travels, but I was willing to check this one out – especially with my Rick Steve’s much abridged  “Highlight Tour” in hand.  We were able to book our tickets for the Academia (Where the David hangs out) and the Uffizi Gallery ahead of time and avoid the long lines.

We arrived, put our airplane to bed for a few days and checked into the hotel.  (Westin - highly recommend it.  However, eat breakfast outside the hotel as the buffet is over 30 Euros.  We found a nice breakfast place just down the street for only 5 Euros.  (I'm talking the Euro currency, not the people.  As in, "Look at all the Euros walking down the street with neon sleeveless t-shirts.") Here you can see the Summer crowds on one of the main shopping streets in Florence.  I've mentioned in a previous blog post that in order to be be a cool Europe destination you need a few things:  A river (check), an old part (check), a new part (check), and a big freaking church. (Check)  Florence has these in spades - the Church in Florence is called the Duomo and dominates the skyline of this gorgeous city. 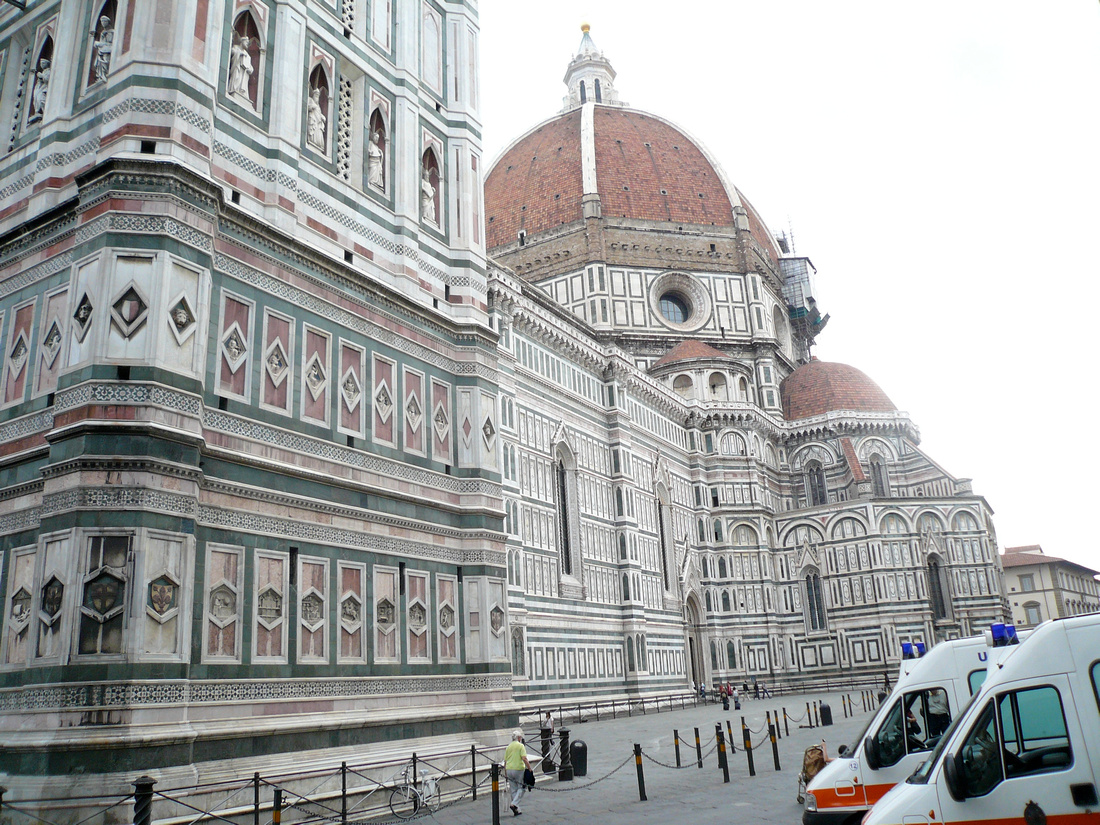 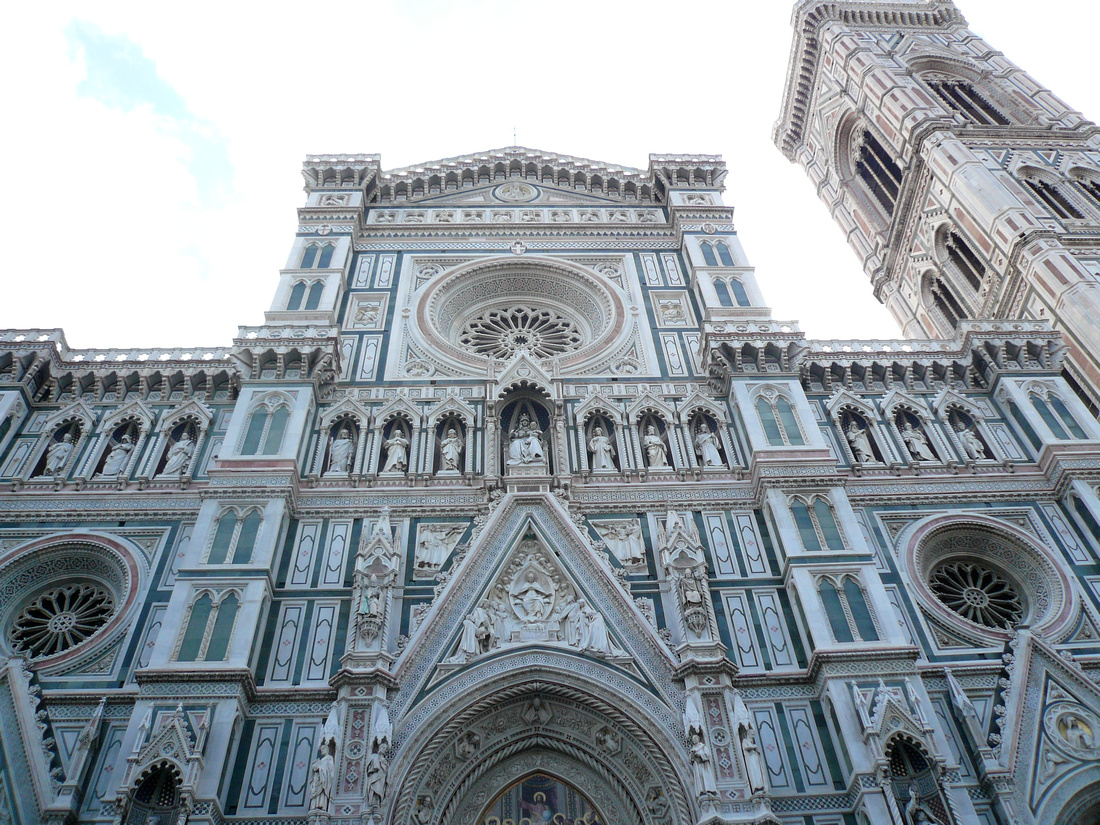 I really like the style on the front of the Cathedral.  I was thinking of doing the same thing to my house.  I wonder if my neighbors would mind?  I'm definitely going to copy the door: 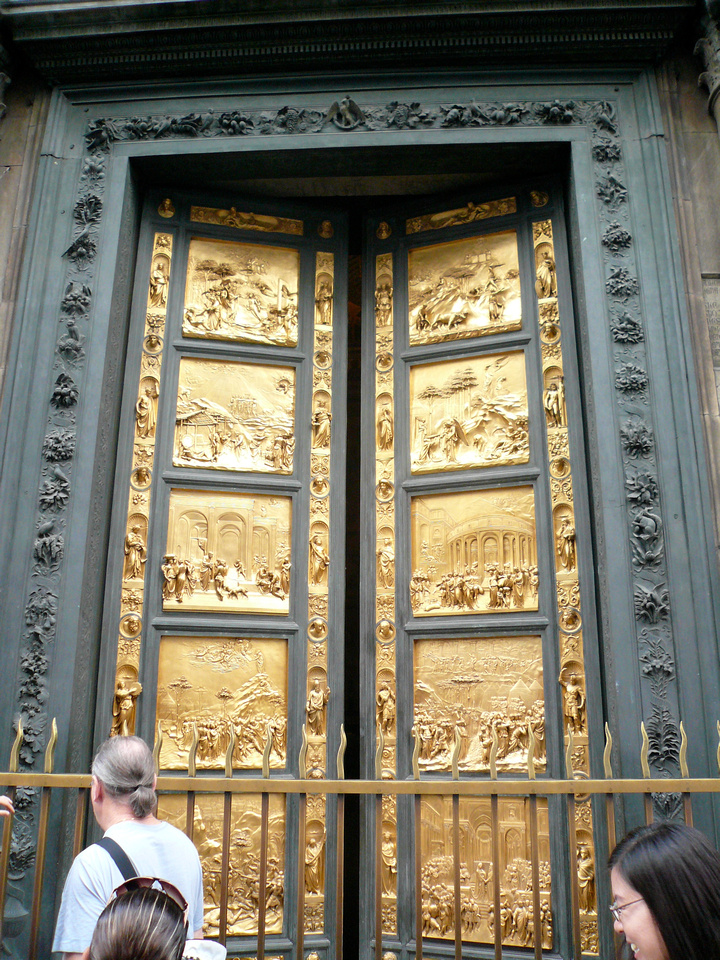 These bronze doors aren't actually to the cathedral, they are to the Baptistery right next door.  They are copies too, the originals are in a nearby museum.  I've read that Michaelangelo was so impressed by these doors he called them "the Gates of Paradise."  (He obviously hasn't seen the front door to my house....  It's something.)  I wonder if the Baptistery residents got annoyed when the paperboy would deliver in the morning and repeatedly use the doors as a backboard to deposit the paper on the porch...  (I was a paperboy as a kid and you would think that people imagine their front doors like this masterpiece when they would chew me out for the above technique..)

On this trip (as I always do when I visit a new European destination) I picked up the appropriate Rick Steves guidebook.  Rick has never failed me, and I wouldn't explore any part of Europe without consulting his sage advice.  I learned a lot of Florence's history though his guidebook and his television show.  Considered the heart of the Renaissance, Florence lead the rest of Europe out of the dark ages.  Previously most of Europe was ruled by the church, and science, style, and forward thinking were brutally beat down.  (Think Afghanistan)  While the Renaissance cultural movement included several subjects, Florence and it's iconic residents embraced art. Guys like Leonardo da Vinci (Not the dude from Titanic) and Michelangelo (Not the Ninja Turtle) were known as Renaissance Men and worked to change the way people thought.  Being surrounded by their world-changing artwork and ideas is motivating and opens the mind.  It also made me hungry....

I've said before that we were only in Florence for 3 nights with my fellow corporate aviation crew.  We actually planned ahead for dinner by asking our hotel concierge to book us a table at a decent restaurant. (Another reason I prefer corporate aviation over working for the airlines...) He wrote down the address and we left the hotel and headed out to find the restaurant.

Oddly enough, many of my significant experiences have happened as a result of chance.  While I am definitely a "planner", chaos theory often decides to change my plans and I can end up off in another direction altogether.  This happened that night.  While we were walking down the main pedestrian street we were approached by an attractive Florentine woman.  (Get your mind out of the gutter - this isn't THAT kind of story...) She asked us if we would like to try her family's restaurant.  We all looked at each other and said, "okay." (The gorgeous woman soliciting diners is a brilliant marketing strategy by the way..) and we abandoned our previous plans and headed off to her family's restaurant.  It was kind of early, so we had no problem finding a seat.  Unfortunately after we sat down we were ignored - 15 minutes had passed and nobody had even acknowledged us.  We were about to get up and leave when a local guy at the table next to us took notice.  He and his buddy were eating and working on a second bottle of wine.  He asked us where we were from,

and engaged us in conversation.  After determining that we were okay he asked us if we wanted to experience a traditional Florentine meal.

Then then asked, "Do you like-a the red wine?"

He asked if we minded if he ordered for us -

"That would be excellent, thank you."

He then got up, physically grabbed one of the wait-staff and started barking orders in loud Italian.

What followed was probably the most special international experience I've ever had.  The food was delicious, the Tuscan wine was fabulous, and our host was gregarious.  We dined for hours, drank lots of wine, and conversed with the local gent and his sidekick.  He took us in and made us feel like locals - I'll never forget it.  Unfortunately I can't remember the restaurant, or our host's name (probably had something to do with the wine) but I will never forget the experience.  If I ever have an opportunity to act as a host to foreign visitors in my country like this man did I'll do my best to pay it forward.

Ok, time to do some shopping: 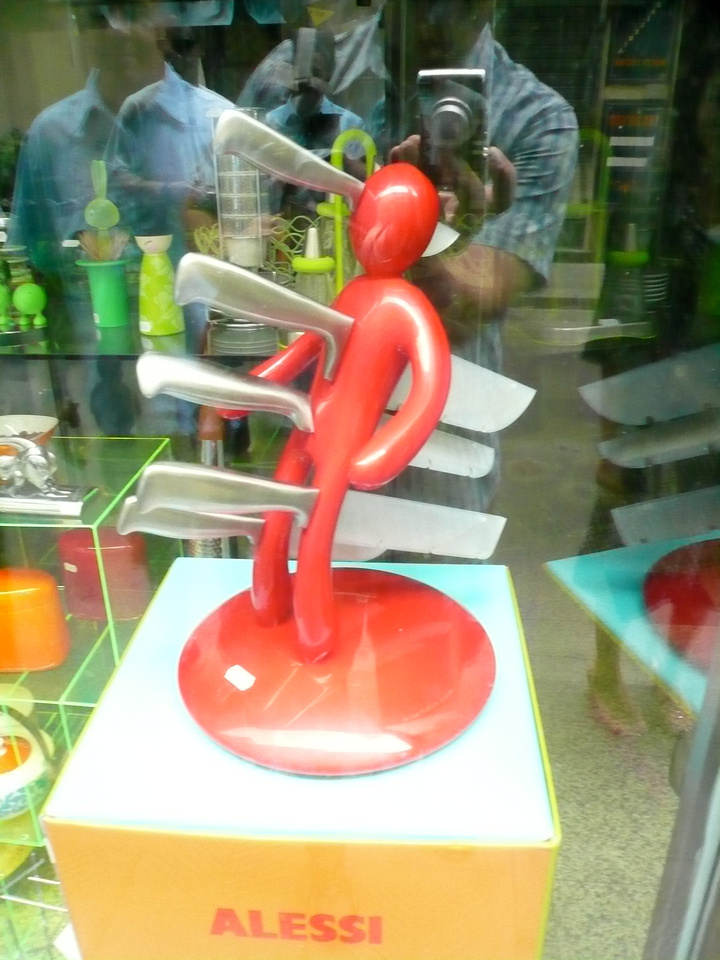 I wondered if my wife would like this knife stand.  "Hey honey, I picked you up something from Florence on my tough business trip.."  Not a good idea, I should check out the jewelry shops instead...

One of my favorite things to do in the afternoons in Europe is find a table in a populated square, maybe have some local wine (I don't want it to sound like ALL I do on my trips is drink wine - it just worked out like it in this blog post... I PROMISE....)  We found a square called the Piazza della Republica that offered good people watching.  We made people watching here a daily activity and we noticed something interesting.  About 5pm every afternoon, 4 elder gentlemen would each arrive from different directions and meet in the center of the square.  They would then engage in animated debate for about an hour, often appearing to be on the edge of coming to blows.  Then, like clockwork, at 6pm they would each about-face and depart in a huff.  We asked our waitress what was going on and she said they did it every day.  They would come, argue politics and then depart.  I love Italy. 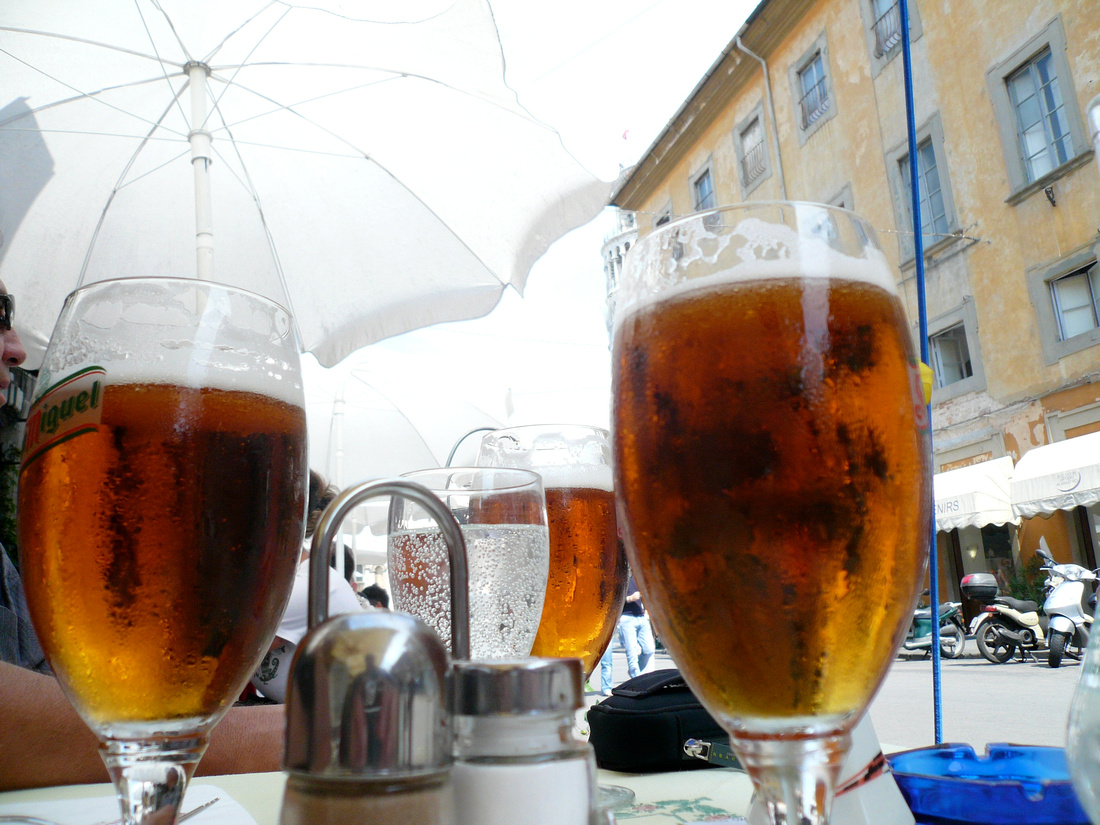 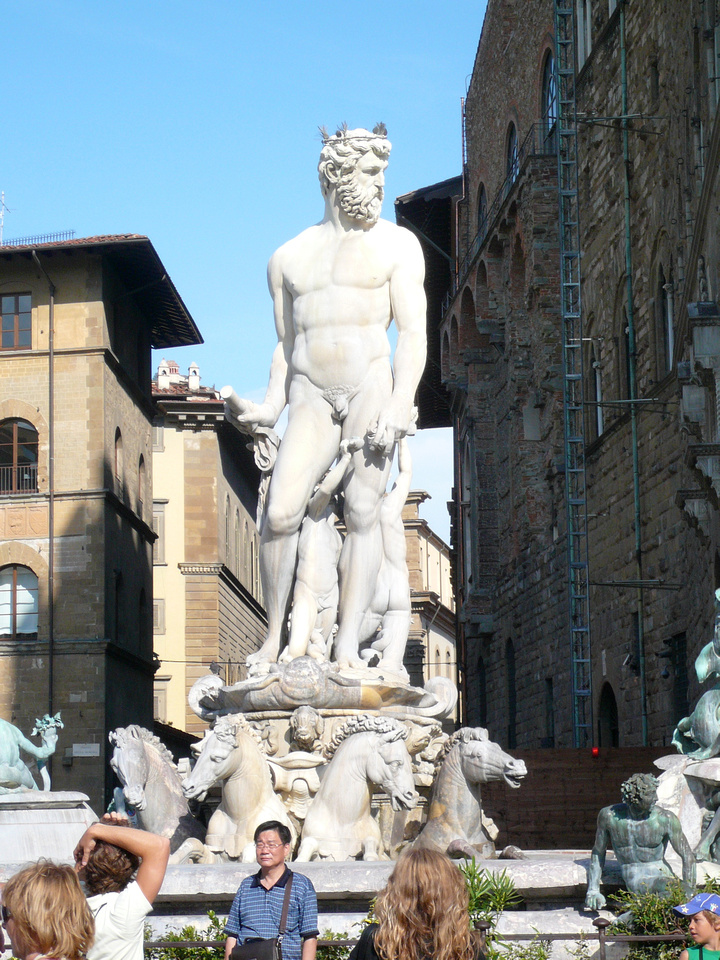